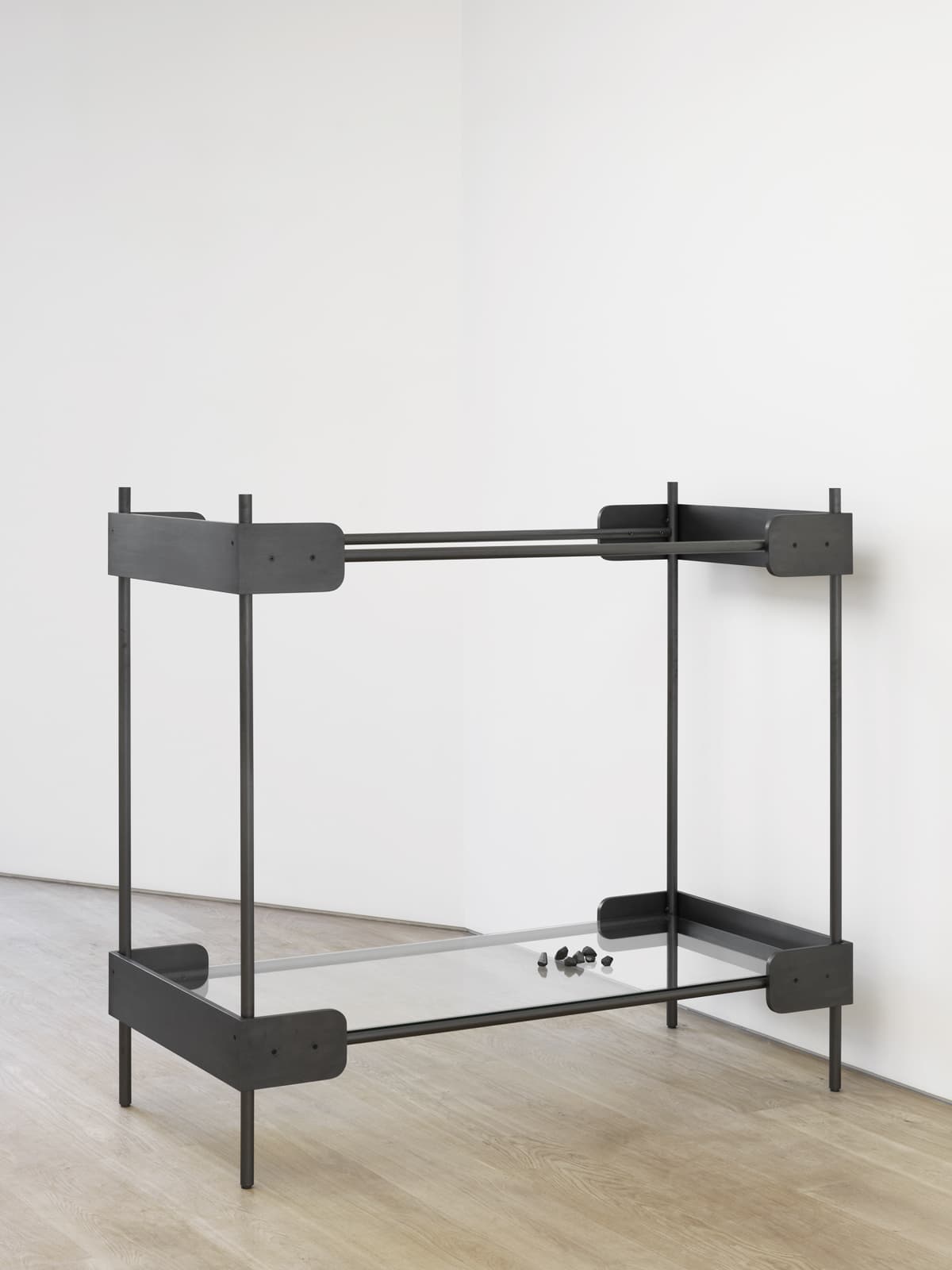 Ajay Hothi meets with the Cuban artist on the opening of his first UK solo exhibition in London exploring the effects of a Communist upbringing and forced ‘collective identity’. Marlborough Contemporary on Albemarle Street, just south of Mayfair, feels like the quintessential West End private gallery. Its engineered wooden floors and snow coloured walls seem to predate the almost-comprehensive influence that the Conceptual Art movement had in transforming the grand academy galleries into the bare white cubes that have been so prevalent since the 1960s.

The effect adds to the layers of uncertainty that surround the work of Diango Hernández. A series of mid-sized pictures line the gallery walls, except these pictures, on first impression, are blank. Actually, they’re graphite sculptures. Similarly, a steel bunk-bed in the corner of the gallery is also made of graphite, and on the wide vitrine that is the gallery’s centrepiece are a few blueprints, technical drawings and a small architectural maquette made of cheese. In their own way, all of these works seem – initially – unapproachable, particularly the cheese, which gives off a slight smell.

“The stories are the beginning of my work. Only through the reading of the stories can you know my work.” Between the ages of 12-18, Hernández was sent from his home in Sancti Spíritus to a boarding school in rural Cuba. The aim of this school (one of many in post-revolutionary Cuba) was to embed in its students the Communist ideology. While half the school worked in the tobacco fields, the other half studied. They traded places in the middle of the day, and this was the common routine, six days a week for six years. “The family was contaminated with the ‘old’ ideology. The aim of the school was to produce the new individual: the new man or the new woman. It was based on collectivity. There was no privacy. There were no locks anywhere, even in the bathrooms and showers. This is one of the common features of fascist regimes; a sense of being united in work and study.”

Close inspection of the graphite sculptures reveals their painstakingly precise detail. Hernández has etched an outline line drawing into the surface of each canvas: dogs, birds, farmyard animals. The effect is comfortingly intimate, even though the line drawing might be impossible to see, even at arm’s length from the image. Truly attendant viewing is dependent on the break of light. The story of these images is frighteningly disturbing.

“These are drawings of porcelain figurines. They were made in a small factory in Allach, near Munich. The story of Central European porcelain is all about clean lines and smoothness, about trying to create a surface of such perfection and beauty. But in every form of beauty there is pain and suffering. Every collector of porcelain, when he gets his hands on a piece, admires it and then turns it upside down to see the stamp of where it was made. These pieces were made in a Nazi concentration camp, by concentration camp slave labour.”

“For me, drawing is the source. There are many levels of language in drawing and even at its most technical there’s synchronicity between the people who know how to ‘read’ drawings, even if you’re in China or if you’re in the USA.” This reminded me of one my favourite quotes by Hernández, which I then repeated back to him: ‘A drawing is a vision of the future.’ “Drawings are very simple to understand. I like to think we could use drawing as a way of saying we can start again.”

“In my fantasies there is a way to rewrite history if we draw. The blueprints of something are its tools, but they get forgotten and instead we have photographs and documentation. But drawing can be a fiction too, and I struggle with that. I wanted to make the drawings invisible. Imagine each canvas here is the surface of a pencil that has been magnified hundreds of thousands of times. These are drawings in the material. It’s absurd to me; you don’t see the drawings, you just see the material.”

These aren’t works that can be held to criticism in the conventional manner. To understand them, you have to understand the artist’s motives, reactive sensations and beliefs and personal history. The German artist Dieter Ruckhaberle made a poster in protest to Documenta 4 in which he wrote ‘What’s left to do for artists of a nation that wages a criminal war such as the one in Vietnam…other than to make Minimal Art?’ and, as many critics have written since, minimalist forms better serve the clear communication of ideas. Hernández’s protest is political, for the future, but it’s also a protest against history.

“At a certain point, contemporary art has to remove itself from any kind of cultural reference. I am totally aware of what it means to be in this gallery, on this street, in this city. I’m aware that I’m serving certain values. Being an artist is seen as one of the most noble and enriching things that you can do, but at the end of the day you are creating capital.”

So is this why you made pictures that can’t be seen, an installation that’s incredibly fragile and an architectural model that will biodegrade?

“These are all challenges for the gallery. Art is the value of the ideas behind the object. Unfortunately the value is often due to the artist and these objects and their references. Look, the Royal Academy is very close, and there are works of great value there. And who do you have there? The Masters! If you are in this academy system learning from the Masters, then what does that make you? The slave!”