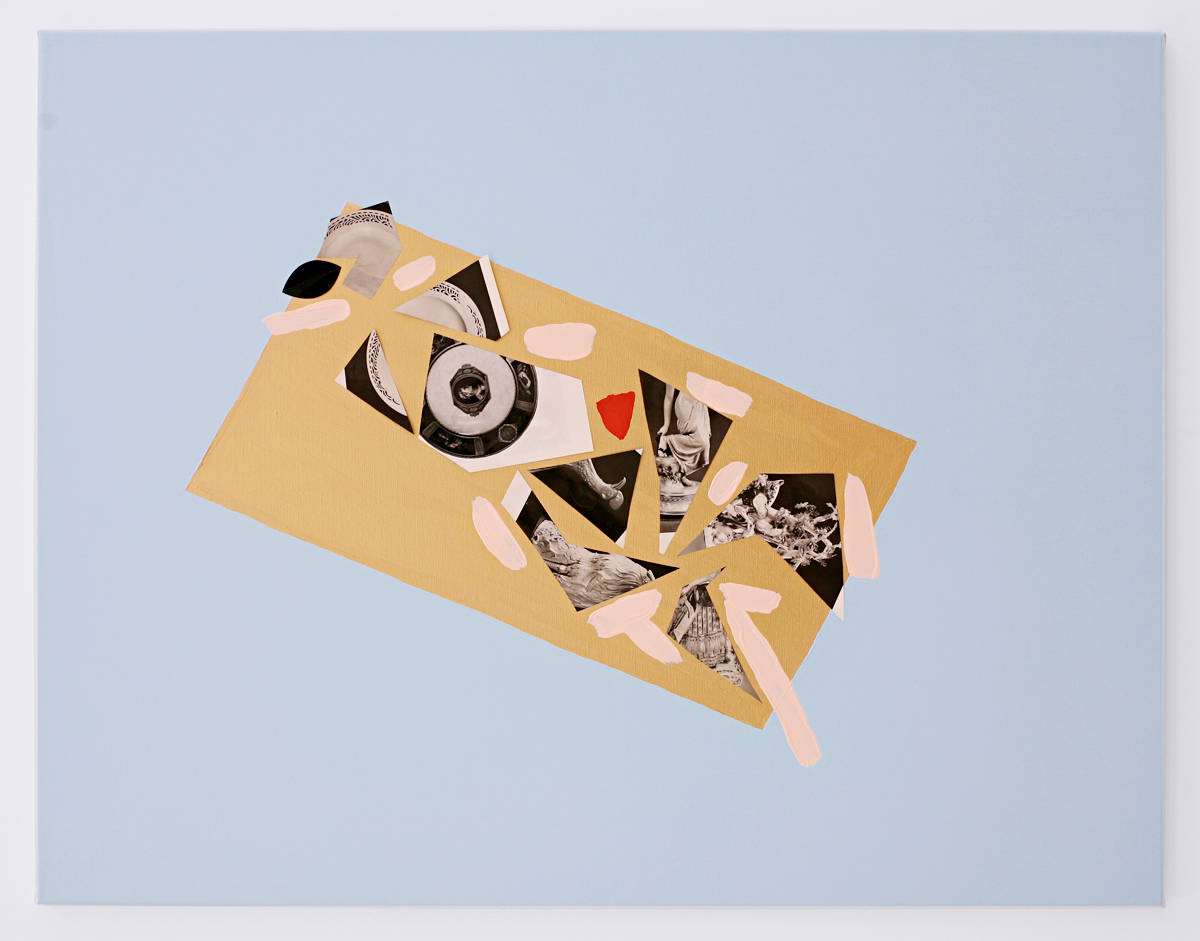 One wall of Diango Hernández’s new show out-of-place artefacts (OOPArt), is lined by a row of bright collages, ‘Collagen’, 2008, that immediately attract the attention of the male. Here photographs of chintzy 18th century porcelain figures are spliced with cut-out shapes from soft-core magazines. Prancing horses now have a model’s tanned buttocks. Black-stockinged thighs adorn a teapot. Hernández states his aim is to mock the objects and thus adhere to what he calls ‘one of the most important principles of a social revolution – to deconstruct the idea of the bourgeoisie’.

One might suspect that in the light of recent financial catastrophes pornadjusted knick-knacks are the least of the worries likely to afflict the great Iceland bank-investing middle classes. Indeed such artworks appeal to the vapid collectors agog for the latest Richard Prince edition of appropriated tat or John Currin’s visions on Pornotopia. A week can be a long time in the art world too and yesterday’s ‘dirty strategies’ (Hernández’s term) of aesthetic sabotage can seem feeble in the face of international trading meltdown.

But Hernández (a Cuban exile now based in Düsseldorf) rejects a return to Castro style state excess as a panacea for our contemporary ills. Modern Cuba is no utopia. His website is presciently called ‘The Museum of Capitalism’, arguably an appropriate title for the world we now all live in as of October 2008.
The aforementioned collages also illustrate an artist’s book that accompanies the exhibition which re-configures Che Guevara’s ‘Guerrilla Warfare’, 1961, with its chapters on combat, training and indoctrination. Their inclusion here seems obscurantist; they lack the risible flavour of Franz West’s similarly lurid hybrids and can be seen to acknowledge, rather than critique, the objectification of the naked female form. Hernández is on much more lucid form in his considerations on light and its links with the history of power. In the installation ‘Shooting the Light’, 2008, we encounter a large pile of stones facing a series of Serra-lite bronze back boards. In front of these dangle seven lit light bulbs. Your job is to pick up a rock, aim and chuck. It’s an adult coconut shy to shoot out the lights, but there is an undeniable thrill in threatening the gallery with darkness.

The Guevara book is dedicated to his mother who, one suspects, is responsible for the frugal epigram, ‘we won’t need the light in this room’. It was Joachim Teichmuller writing in 1927 who heralded the concept of ‘light architecture’ and who professed ‘the electric light bulb has brought in a new age’. ‘Shooting the Light’, in stark contrast to the tired collages, is an iconic work for newly straightened times. The lights over Europe, over the globe, are going off once more.

John Quin is a writer based in London and Berlin.