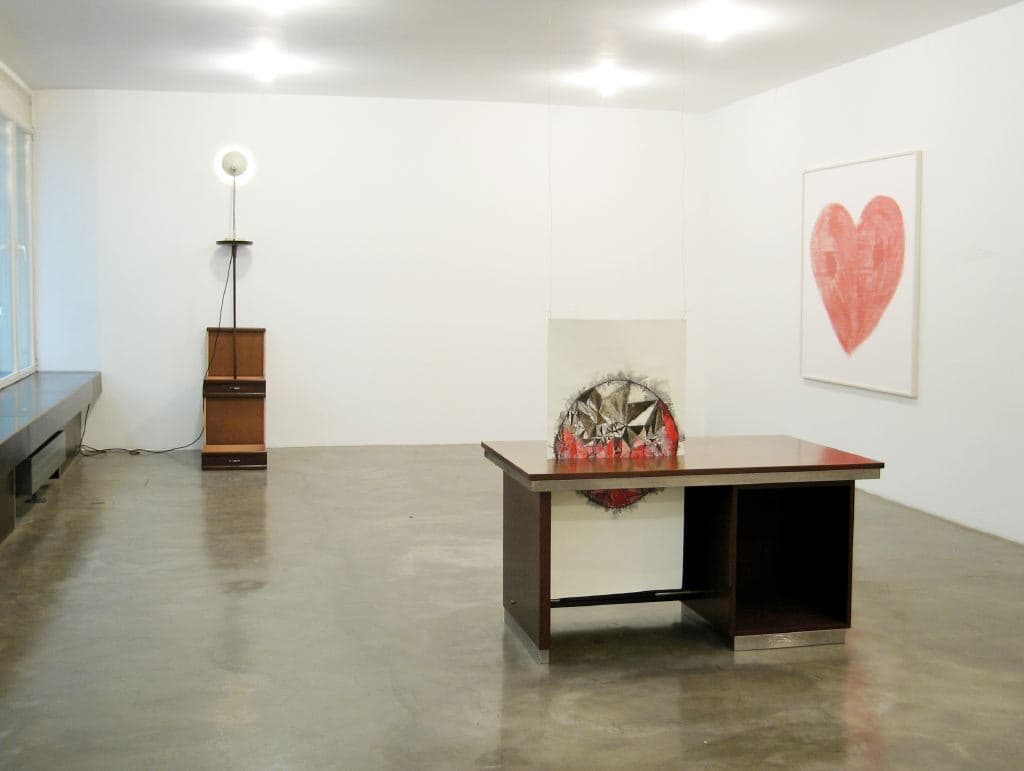 Varadero beach and Guantánamo bay by Diango Hernández. Domestic objects twisted by political slogans, so twisted that they became art pieces. Dictators sometimes make us happy and sometimes very sad. They produce anthems, huge monuments, walls and wars, they have the power to be our only god and they last longer than marble. This exhibition presents a group of “phrases and drawings” that reflect the relation between the dictators and the hope of their victims; showing the art field as a space where personal testimonies can be revealed and can be as effective as they are on my notebook.

In the 90’s during a trip to Varadero Beach on a 21st of June I witness a “permanent sunset”; the sun stayed longer than usual on the horizon, it was immovable, half of it was under the water and the other half was burning in the sky, transforming the Varadero beach into a red beach. The sun didn’t move but we did. Sunsets are always romantic (see Glen Rubsamen paintings); for some reason sunsets come in the same package as love does, no matter if the love is real or paid. The 21st of June is also the longest day in Cuba and it is usually a very beautiful summer day, if you go to Varadero Beach you will see how during this day the blue sky becomes beach and how the beach becomes a place without Cubans. Guantánamo bay and Varadero Beach, for completely different reasons, are the only two pieces of Cuban land that Cubans are not allow to step on.

I didn’t go to Guantánamo City, it always was, and still is today too faraway from my hometown.  I got to know at school about the Guantánamo’s American military base but somehow neither books or teachers seduced me enough to travel there; nevertheless I knew about the 2 meter high fence that surrounds the American occupied area and I knew also that people living in the villages around the military base can reach American television channels using ordinary antennas but nobody can’t get closer to the Military Base perimeter because it is all sheltered with anti-personnel landmines.

Guajira Guantanamera (1928, “Countryside girl from Guantánamo”) is perhaps the best known Cuban song and it tells the story of a beautiful girl born in Guantánamo.  This song has a very particular structure and history, it doesn’t just have one composer, it has been modified over time; neither its rhythm or its melody has changed so much but its lyric, in the internationally known version the song includes the first poem in the collection Simple Verses by Cuban poet and National hero José Martí, also known as “El apostol” (The apostle). José Martí has a monument in the Central Park in Havana as well as in Central Park in New York. In the evening of the 3rd of March of 1949 three drunk Americans marines climbed up and pissed on the José Martí’s Havana monument. The next morning after the incident, the picture of the three white uniformed American marines on top of the white marble monument was the highlight of couple of national newspapers. If you have a closer look at that picture you will recognize how bizarre it is, the marines look like three monkeys on top of a white tree, but the most amazing thing about it is how the marines became part of the monument and as a result part of our daily life.

Since I glued the picture of the American solder’s ass into my songbook next to the Guantanamera lyrics I always have fantasized what this beautiful girl from Guantánamo and José Martí would think about the American soldier’s ass, and I am quite sure that they would have a very different opinion about it.