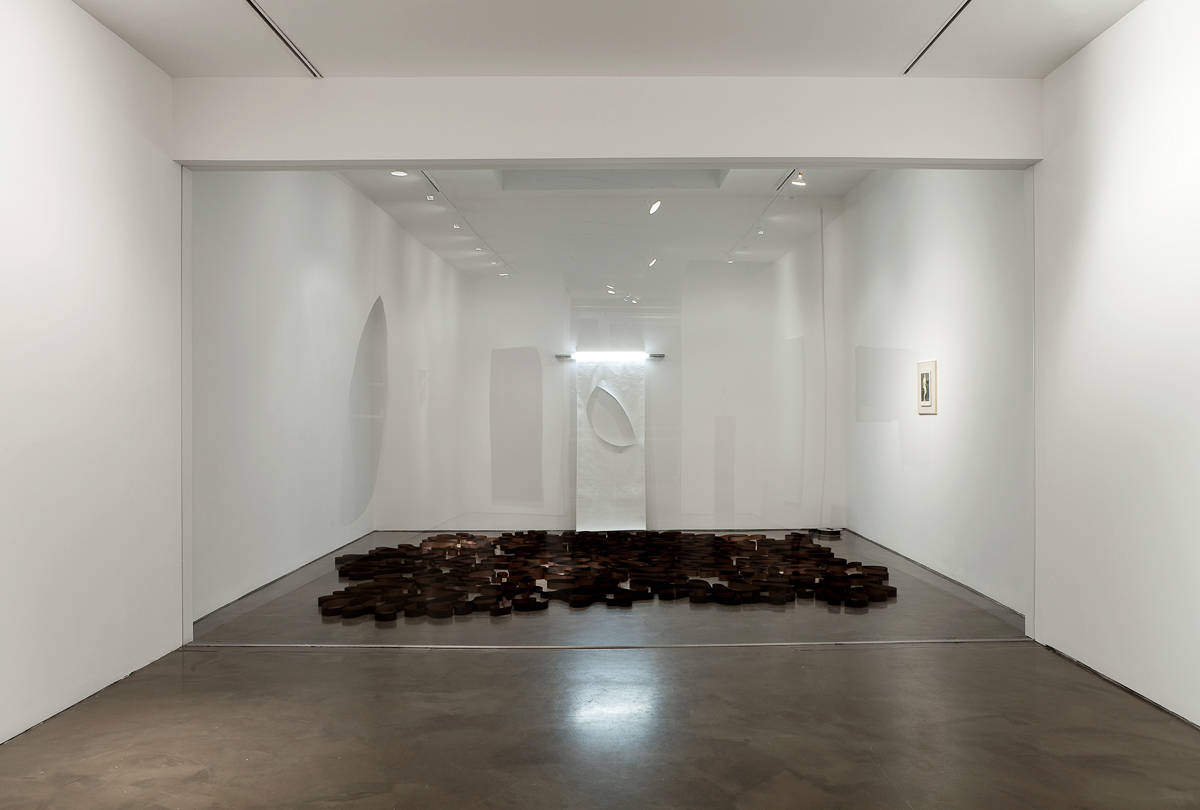 Exeunt By Diango Hernández for solo exhibition "If I send you this" at Alexander & Bonin, NY

In 1967 my great-grandfather wrote in a letter to my grandmother: If I would find a way to escape this country -and most important- if I would find a place where we can live all your sisters and brothers together, would you like to come with us? In an earlier letter sent also to my grandmother in 1958, my great-grandfather wrote: …What all my life I thought it was my homeland, in the last years has become a strange place but is not necessarily making me feel like a stranger.

I guess many people have done it already nevertheless I ask myself -what is that thing that artists are restlessly looking for? My answers to this question are all narrow-minded and fluctuate like the weather.. So one could say, I’ve never been satisfied with any of my answers about this particular matter. Lately the idea of ‘exiting the complexity of reality’ earned a bit of my consideration:  it might be the starting point of a good answer to the subject.

What Gordon Matta-Clark did in 1975 with his Day’s End artwork wasn’t a cut on a building’s facade but instead the construction of the ‘exit’ I am referring to. For many people, Day’s End was just a hole that could take their eyes from the inside of a building to the outside and vice-versa. Some people talk about this particular Matta-Clark cut as ‘the cat eye shape’; after I have geometrically and metaphysically processed this particular shape I decided to call it: Exeunt.

Exeunt is the paradigm, which proves that I am not far away from a good answer to my question. It’s also Exeunt as the highest expression that a shape could achieve in terms of geometry and in terms of ideology. If I am not wrong and I will get a good answer from the study of Exeunt, then my next question would be – if what artists are looking for is ‘the exit’, where is this exit leading us to? Of course I won’t dare to answer this second question before answering the first one but yet I would say hypothetically that Exeunt is definitely not leading us to a place.

The American Consulate in Havana, (built in 1953 by the architects, Harrison and Abramovitz), is nowadays one of the most visited public buildings in Havana. Hundreds of Cubans seeking  an American visa queue every day in front of it; entire families, couples, singles, old and young people, blacks, whites and mulattoes all looking for the same: a ‘ticket’ to another place. A place that is not that far, only 90 miles between one piece of land and the other. What would normally take no longer than 45 minutes by plane, takes a lifetime to reach for most of the people in those queues.  I have myself queued in front of the same building, listening to the desperation of strange people and hallucinating because of their stories, longings and hopes.

After hours of waiting it is my turn to get inside the American Consulate.  On my way to the entrance I counted three guards; I crossed through the big gate that separates Havana from the ‘American soil’ and to my disappointment, a guard tells me that I must turn left and sit under a tent which has been built outside the main building, especially set aside for those Cubans that have a visa appointment. It meant that I couldn’t enter the main building; I was so curious about its interiors and the smells I would find in the offices. The night before my appointment I found myself fantasizing about how Havana would look from one of the American Consulate windows.

I know that is impossible to ask my great-grandfather if he found that idyllic place he was referring to in his letter: his answer would have contributed immensely to my studies. Nevertheless instead I decided to ask my grandmother since she joined him before he died. A month ago I called her; I dialed her number and after couple of rings there was her voice saying, “Hello, is America speaking”. It was only then I realized how stupid my question was. My great-grandfather named his beloved daughter ‘America’; at least now a very large area of my puzzle is almost completed.

Even if ‘Day’s End’ has been ‘erased’ long ago by the hunger of some NYC urban planners, I swear I have seen here and there the same Exeunt, sometimes even on the American Consulate’s facade in Havana.

An exhibition of new work by Diango Hernández titled, If I send you this, will open at Alexander and Bonin on Tuesday, September 6th. The artist has transformed the architecture of the first floor gallery to accommodate two site specific installations.

In these installations the artist has re-imagined the geometric ‘cat eye’ of Gordon Matta-Clark’s 1975 “Days End” as an escape from a space of restriction to a space of freedom. In the main gallery, Hernández is re-removing these shapes, ‘exeunts’ as he has termed them, from the walls and repurposing them as the tables of an imagined agency of international transit and transition. Each table is fitted with a center-piece; a square Plexiglas container within which international stamps circulate endlessly. By juxtaposing the ‘exeunt’ and signs of international correspondence, the artist draws from his experience of the American Embassy in Cuba; a building unused for its intended purpose since January 1961.

Visible from this bureaucratic space through a Plexiglas window is a reliquary; a floor covered in carefully looped magnetic tape loomed over by yet another ‘exeunt’, this time cut from a large sheet of paper and lit from above by a neon tube. The magnetic tape, mute without its accompanying audio device, reiterates the barrier between audience and content, past and present. The motifs embodied in the installations recur in collages, sculptures, letters, and paintings on view through the first and second floor of the gallery.

Born in Cuba in 1970, Diango Hernández began his artistic practice as a co-founder of Ordo Amoris Cabinet, a group of artists and designers who focused on invented solutions for home design objects to compensate for a permanent shortage of materials and goods.In 2005 and 2006, he exhibited at the Biennale of Sydney and the São Paulo Biennial respectively and in 2007 his work was exhibited in the Arsenale as part of the 51st Venice Biennale. His work has been the subject of several one-person museum exhibitions: Kunsthalle, Basel (2006), Neuer Aachener Kunstverein (2007) and Museum für Gegenwartskunst, Siegen (2009). In November 2011, Hernández’ work will be the subject of a survey exhibition at MART (Museo di Arte Moderna e Contemporanea di Trento e Rovereto in Italy).

“If I send you this”
September 6–October 12, 2011
opening Tuesday, September 6, 6-8pm
Alexander and Bonin
132 Tenth Avenue
between 18th and 19th streets
NY, US
www.alexanderandbonin.com