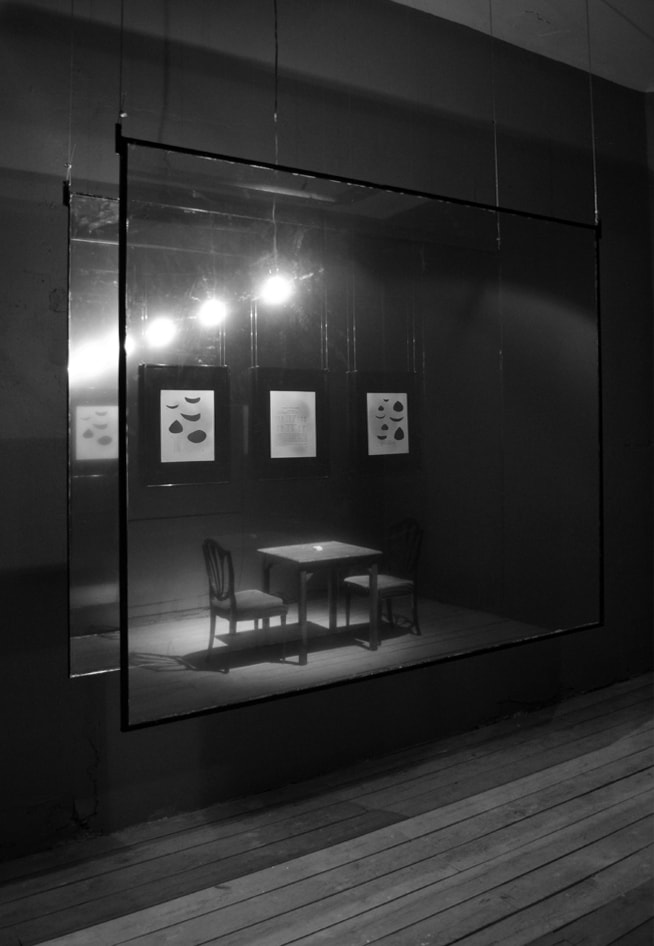 Sometimes I think about Marcel and I remember him telling me: ‘The visitor is an invisible being, a volatile element and therefore the visitor is by principle uncontrollable’ With vehemence Marcel would continue: ‘If you would know my plan, maybe you would understand that a single space can only be occupied by a single idea’. Yet to all my efforts towards defining a new type of visitor, I failed to convince Marcel. My thoughts were too out of focus and my arguments were too redundant. Marcel’s ideas occupy a very defined place in my memory: maybe a space that is also occupied by all the things that I would like to change.

A conversation with Marcel wasn’t ever enough, but neither an interview could ever allow me to know exactly about his master plan: the plan that I thought he was meticulously designing, a fictional plan that consumed every single cell of my existence. It was hard for me to believe that an interrogation could eventually work, I was thinking about this possibility for months until I decided to finally interrogate him. Honestly, this was my last remaining desperate attempt, now it was clear to me that Marcel would be at least temporarily guilty and I would remain eternally as the mediocre. I didn’t really care: better to live as a mediocre than to died without knowing Marcel’s plan.

My first problem was to select the interrogatory space: I knew well that Marcel hated symmetrical spaces without windows; nevertheless I was determined to design a clinical space. I wanted to build an absolute space where walls would not only define a perfect form, but also control precisely Marcel’s mind. My second and most complex problem was about myself: How do I become an interrogator? Marcel and I knew each other since we were kids and even though during the last years we were more and more distant from one-another, we still had a fundamental connection. Before staging the interrogation I decided that I must find a way to get out of my body. Hypothetically speaking, if this could have been possible, I could have also entered Marcel’s body and the cross-examination would have been unnecessary. All my propositions, like the one just described, were failures.

The interrogation nevertheless did take place. On the 25th of March 1927 in the city of Paris I went to the police office located in the neighborhood of Villette and in complicity with the Captain Caspar D. I accused Marcel with the crime of murder. The following days a series of disastrous events took place, which for the rest of my life, I came to fear.

Captain Caspar D – after constructing the details of Marcel’s case and subsequent to his interrogation – was stabbed in a narrow street in the south of Paris. Marcel now was guilty of murdering Mademoiselle Maret an eighteen years-old young Parisian and I would have to live without knowing ever the outcome of Marcel’s interrogation.

In one of Marcel’s last letters from jail he wrote to me:

Dear Andre yesterday I was remembering with pleasure one of ours conversations about the relevance of the space. During these years as you can imagine the miserly walls have isolated me from everything and from everybody; leaving me alone all to myself. Yet when I consult my memories and I try hard do not repeat them, I confess to you in this short letter, that there is one memory that insists on being remembered everyday. It would be impolite from my side to not describe it to you but as you might understand memories cannot be written; because once a memory is written it becomes a plan.