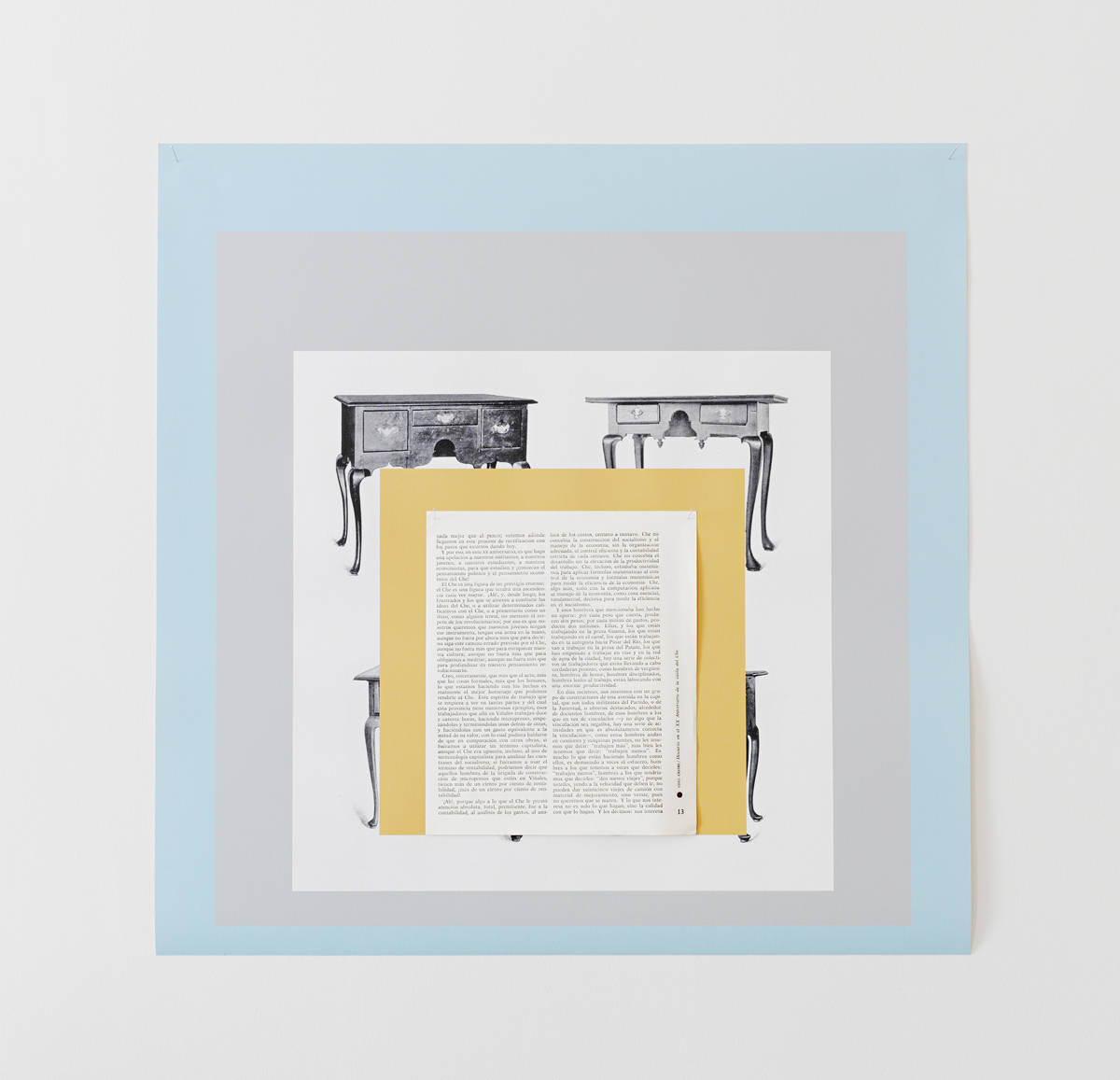 Visible (Homage to the square and colonialism) at ArtCologne 2013 with Marlborough Contemporary, London

The book pages with furniture images that I used for these series of collages come from a 1930′s German book about colonial furniture style. Still in the 18th century for many Europeans the Colonies were remote and dangerous places, only suitable for the adventurers minds, around the late 19th century the western world ‘rediscovered’ the colonies. For this time, as the Romantics did before with the ancient civilizations, the western world found a new spiritual refuge in the colonies. The so-called ‘Colonial style’ was coined in the early 20th century and the Colonial style package included: mystery and a ‘pure’ spiritual aura.

Albers’ ‘Homage to the square’ extensive series of paintings and studies about color fields, is for me one of the most intriguing artistic strategies of the 20th century. As we know Albers introduced only subtle changes in the formal structure of these series of paintings, in his color field paintings the relevant changes come from the variation and perception of color itself. Albers’ ‘Homage to the Square’ represents to me an extraordinary reflection on perception in general. Formal changes are detected more easily by our senses but color changes are way more subtle, only the good and keen observer can tell when they have changed. The squares in Albers are for me isolated areas, they are well defined frontiers as if they were boundaries definitions in a colonial Mapa Mundi, only the colors can eventually change but the isolation and restrictions are a permanent circumstance, a formal and structural fatality. I altered the title of Albers’ series in the same way I decided to substitute in each painting a color filed by an strange layer (a book page). In this way the squares are no longer limits, they became stratus. They hold and give support to each other but unfortunately the ones under can’t be properly seen.

I just forgot an speculative remark -The notion of order proposed / imposed by Germany in the actual European economy maybe represents a new beginning for colonialism. Albers was one of the German Bauhaus artists that contributed to define the ‘New laws’ of perception and understanding of co-relations between a physical fact and a psychic effect. The Gestalt psychologists greatly influenced Albers practice, specially Rudolf Arnheim. Order is a necessary condition for anything the human mind is to understand. Arrangements such as the layout of a city or building, a set of tools, a display of merchandise, the verbal exposition of facts or ideas, or a painting or piece of music are called orderly when an observer or listener can grasp their overall structure and the ramification of the structure in some detail. Order makes it possible to focus on what is alike and what is different, what belongs together and what is segregated. When nothing superfluous is included and nothing indispensable left out, one can understand the interrelation of the whole and its parts, as well as the hierarchic scale of importance and power by which some structural features are dominant, other subordinate. When order comes from disciplined creative processes could develop into a reactionary doctrine. Introducing doubts into logical order allows us to create mistakes, which are for me the fundamentals assets of positive development. One of the most known maxims of the Gestalt psychologists is: “The whole is greater than the sum of the parts”

The last layer, let’s call it the visible and the one that can easily be removed, come from Fidel Castro’s speech about Che’s death in Bolivia. Somehow his death marked a very important moment for the post-colonial times. That’s the last layer of each one of the collages, a pinned floating book page, the only layer in that piece that can be easily replaced. I guess the only layer that can also easily be added to many other complicated juxtapositions of historical contemporary events.