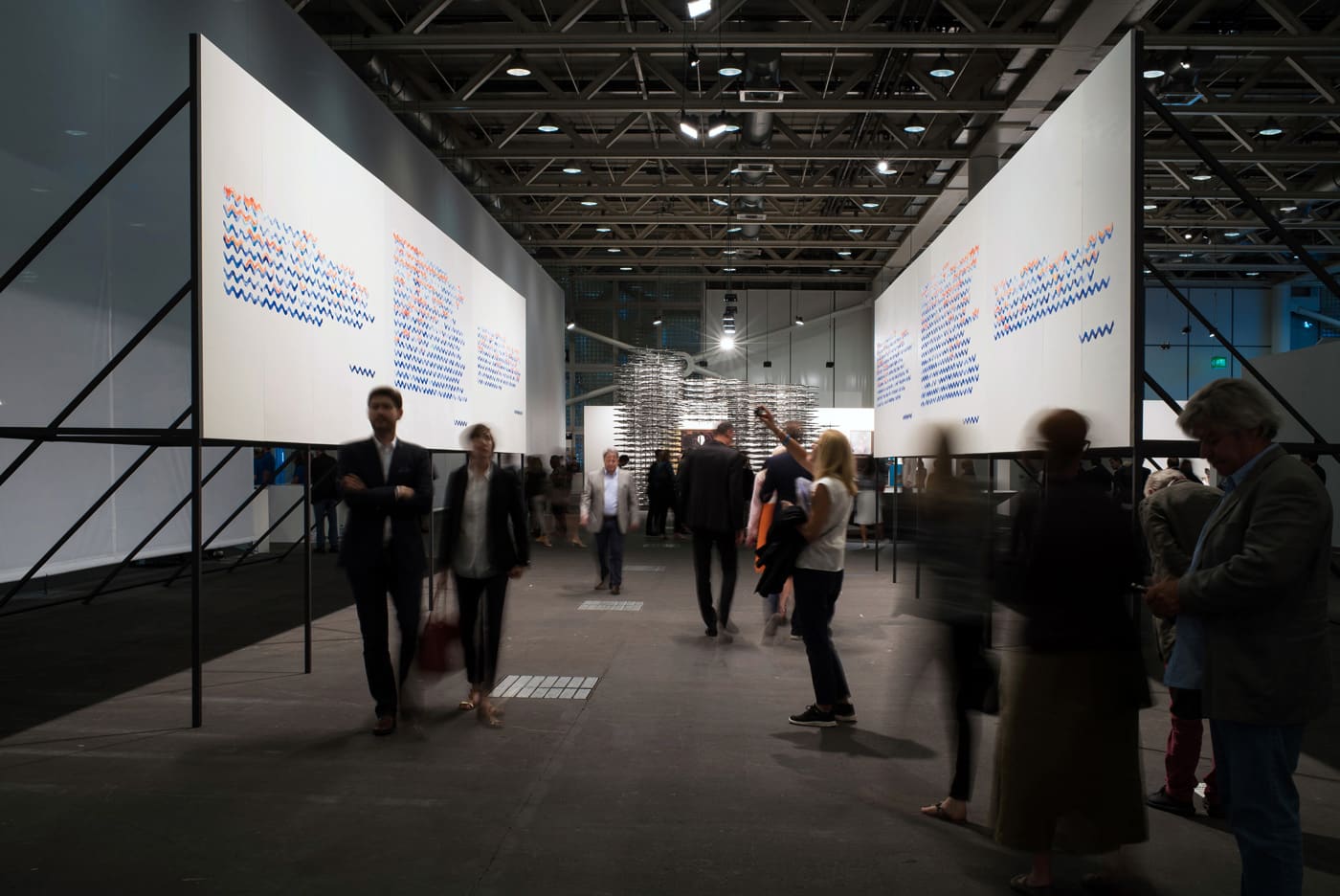 Words to Sea is a ‘translation’ of six quotations extracted from Fidel Castro’s 1961 speech, Words to Intellectuals. The ‘translation’ has been made using a font called Waves that Hernández has created especially for this work.  All characters in the font look the same, therefore once the text is changed into his Waves font what we see looks like a repetition of the waves of the sea.

The six billboards are arranged in two rows form a corridor through which the viewer may pass, or which itself might block the expected sight-lines of the billboards.  The scale of the billboards is such that they will be visible and ‘readable’ from great distances, and yet the content of their texts is unknowable in the translated, visualised, form.  The supporting armatures are as visible as the ‘information’ they present and function in a sculptural way.  These canvas screens not only resemble commercial signage but might also resonate simultaneously with a history of painterly abstraction and agitprop.

Castro’s speech contains the significant phrase ‘Inside the Revolution, everything; outside, nothing’. This manifested itself in increasing control of artistic life, while growing shortages led to a hierarchy of cultural priorities. The importance of culture within the nationalist paradigm is expressed by the concept that every Cuban has the right to acquire cultural skills and, following the success of the literacy campaign, this resulted in a programme which used young ‘instructores de arte’ to carry artistic training to schools, factories and the countryside. Such ‘vulgar popularisation’ alienated and alarmed many established artists as much as ‘Stalinisation’ and, seeing their once privileged position being devalued, drove many to leave to an exile where they felt more valued.

I’ve watched too many times Jeremiah Johnson – the story of a deserter, a man who exchanges a country busy with war for the peaceful and extraordinary wilderness. Confronted with the task of surviving Captain Johnson learns that isolation is the best way to succeed. In silence he lives; language is of no use to him.  In this sense Jeremiah Johnson could be the story of a romantic, or better to say, the story of an American romantic.

The amount of risk involved in the trajectory is what makes a journey different than another. There are only 90 miles between Cuba and Florida.  But these 90 miles are different from many others. Salt water and sun, sharks and the Gulf Stream, make them unique. It is the first time that I have written about these 90 miles.  It feels like I shouldn’t, but I have to.

After seven days navigating without orientation all my sweet water reserves were gone.  During the day the sun was so intense that at night my eyes saw no moon, no stars, only darkness. The sea at night looked like a black marble floor, like a fancy ballroom but with no dancers.  Touching my left hand with my right hand was the only way I found to feel some company.

What did I leave behind? Land. What did I have in front? Only water.  Fortunately dreamers don’t need land, but water wasn’t exactly what I was looking for. The constant waves finally disoriented me and after the third day they forced me to believe that there was no end and no beginning, just rhythm. I counted too many waves.  Numbers are endless as waves.

This project has been proposed by Marlborough Contemporary, London and Supported by Alexander and Bonin, NY / Barbara Thumm, Berlin / Nicolas Krupp, Basel