Art should get away from all political mess and move upwards to elevate everyone by Bárbara Celis for turnonart.com 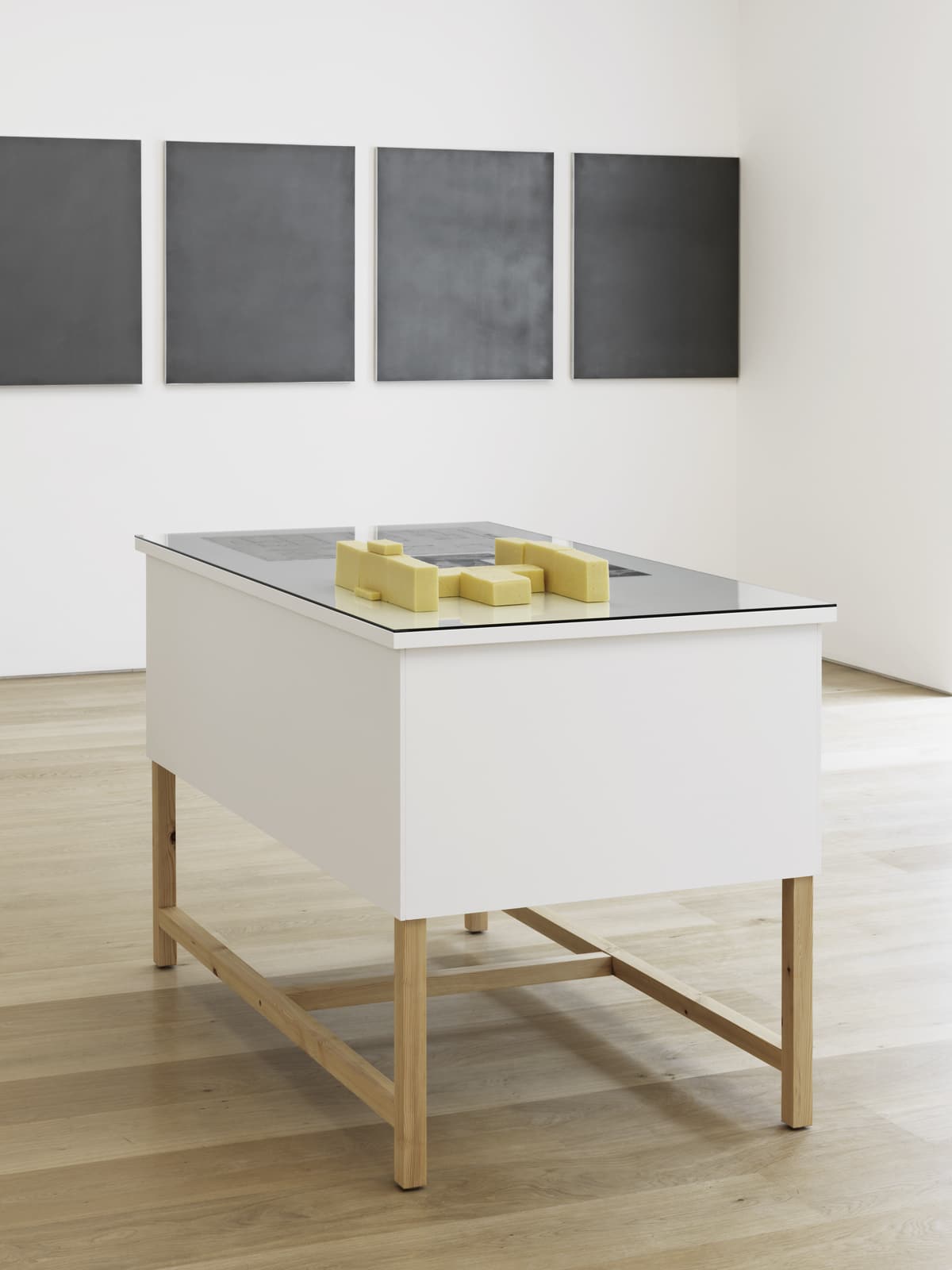 Diango Hernández would like to be considered as just an artist, but having been born and raised in Castroist Cuba it’s impossible for him, as well as for us, to look at his work and avoid politics: ‘We can’t escape from what has shaped us’. There are always at least two sides to every story. Which is why we cannot look at reality from only one point of view. Cuban artist Diango Hernández knows well how blurry the lines are that separate what we see from what we believe we are seeing. He grew up in a country that chose to teach only one side of history, the only one that he was allowed to believe in.

And that’s exactly what he did, until he went to college and started asking questions, which encouraged him to observe from a different angle. Art helped him see everything that was hidden from his generation, (those born in the late sixties, early seventies), that which they weren’t allowed to talk about. In his early twenties he started a collaboration called Ordo Amoris Cabinet that lasted for almost ten years. With this group he started to decontextualize objects and exhibit them in art shows, which began to reveal uncomfortable truths for the Cuban government. Working as a solo artist he travelled the world for over a decade and then he chose to move to Düsseldorf, where he now lives as an emerging talent. At age 43, his current exhibition The New Man and The New Woman at Marlborough Contemporary in London (his first solo exhibition in the UK) could tell us one story, but when you look deep into the drawings he made on graphite canvases we discover many layers hidden by the choice of material, by the light of the exhibition, by the will of the artist. It’s a show that draws on his past experience while growing up in Cuba, where the utopia of building The New Man and The New Woman was deeply connected with his childhood education. That utopia was also shared by other totalitarianisms and Hernández doesn’t leave it out it of this refreshing exhibition: there is no open attack or critic, just a subtle comment about a reality that could feel very foreign to us. A bed with transparent glass instead of a mattress; the H-shaped model of a fascist building made of cheese… Yet, everything he shows us could be closer to our reality than what we might think. TurnOnArt spoke with Hernández about utopias, memories and oblivion a few days after the opening.

Barbara Celis (BC): You grew up in Cuba, an extremely politicized country. Your art feels political too, maybe as a reaction to your upbringing. Is it impossible to escape the footprint of a Cuban education?

Diango Hernández (DH): Before I permanently moved to Europe in 2003, I had travelled abroad often. Most of my trips were short and financed by the cultural institutions that invited me. This type of trip, usually sporadic and short-lived, never gave me the opportunity to properly understand the places I visited. So, when I moved to Europe I had no idea what I was doing, and it was not until the first five years had passed that I finally realized I wasn’t in Cuba. Where did I spend those five years? In a place in between Havana and Europe, with my head on the island and my feet wandering around here. It is impossible to ‘escape’ from what has shaped us. How could we? It would be a linguistic contradiction or existential nonsense! We can all go from one place to another. We can all take a plane, a raft, swim, run and leave behind all the physical and material things of this world, but we cannot leave behind what we are, or to put it correctly, what others have wanted us to be. I’ve never run from anything or anyone, just the idea of escaping drives me crazy. It would mean acknowledging that someone had overcome me and therefore had taken away what even the most terrible dictators couldn’t snatch: my land, that even full of all types of limitations and darkened by intolerance, I see as fertile, green and blue.

BC: Your exhibition The New Man, The New Woman goes beyond criticism of the Cuban regime and extends to other totalitarian regimes, such as fascism and Nazism…

DH: Yes, but I wasn’t interested in comparing doctrines.  What interests me is to see them together as totalitarian forms of government that have profoundly damaged the essence of human beings. The disdain towards people is in the background of each of these doctrines. Their excessive interest in the creation of a ‘new man’ clearly shows that we were never good enough for them and we were never fit for the type of societies they dreamed of. The dream of every one of these dictators has been to shape new generations with their own hands. Each one of them thought that deep interventions in childhood would raise children ready to die for them. In many cases they succeeded, but in many others they thankfully failed.

BC: About The New Man, the New Woman, did you ever believe in that utopia?

DH: Of course, and I struggled to be better and participate in everything that could make me better and to make what I then thought was society better. Driven mainly by my mother, who was a great educator, I grew up doing all sorts of things, studying and working since I was a child. It was not until my last year in school that I ‘woke up’ and began to see reality through different ‘eyes’. When I started college reality had won. The ideology provided to me for so long had vanished, and I began to question everything. By the time I finished college in 1994 there was no socialist bloc and we ‘new men and new women’ had a country in front of us in ruins, a devastating picture, a nightmare that could not have been imagined by the radiant new society we had heard so much about, but that was actually right there.

BC: Your work relies heavily on memories, your memories, and sometimes they are painful, as in the sculpture of the transparent bed, where there is no privacy. When did you decide to transform your memories into art objects?

DH: I began to explore the issue of individual memories and its links to collective memories in 1996.  My first solo exhibition was titled To know who I am. Since then, individual memory, as a way of combining fact and fiction, has been part of my work. It was only when I distanced myself that I could clearly see the value and role of memories, and now each of my exhibitions incorporates them, not as a way to remember, but as a unique way to create. Remembering is a process that often combines introspective and emotional extremes such as joy or sadness. There are parts of memory that are totally unexplored, parts full of mystery that I love. Maybe memories are also a form of resistance, a way of denying that each day, with its heavy weight, falls upon us.

BC: Playing with objects and changing their context has been something you have been doing since you started your career with Ordo Amoris Cabinet. Could you speak about the images from the Allach catalogue where you draw on graphite that are in this show?

DH: The Allach catalogue is an amazing document. Often the history of the industry tells us more than any history book. The relationship between industry and ideology is evident in these documents, ones that are usually only considered as technical papers. I collect many catalogues of objects of all kinds and I have many on European porcelain, a subject that fascinates me, which I also studied for quite a while. I love its symbolism and logos, nearly all power icons and/or symbols of status quo. Interestingly enough, until we turn a porcelain object upside down we cannot see its origin and therefore understand its historical connections. For somebody unfamiliar with Allach porcelain it’s not so different from other porcelain. However, if you learn how it was produced, it becomes the worst of objects [it was made by Nazi concentration camp prisoners]. I am very interested in this change of perspective, one that I refer to as ‘angular perspective’ because by only looking from a certain angle you are able to see the complexity of the object, which to me means everything. When I conceived this exhibition I paid special attention to producing a body of work where only from a precise angle the picture or object in its entirety could be seen.

BC: You force the visitor to get very close to your art works to see them properly. The choice of materials is very subtle, maybe even symbolic?

DH: The semantic mutation of an object and its perceptual change are elements that interest me a lot. Graphite is a material that we all know has a direct connection to teaching. I see the panels and graphite objects as giant pencils, fantastic instruments that we could use to write but also to see reality better, it all depends on where you see it from.

‘We cannot leave behind what we are, or to put it correctly, what others have wanted us to be’

BC: In the Ordo Amoris Cabinet you and your colleague Francis Acea used irony to criticize the regime from within. In fact, you belong to a generation that made an attempt to change the system from within, but in the end almost all of you left Cuba. Why?

DH: The Ordo Amoris Cabinet was an amazing experience for me. It got me started in art and it synchronized me with the present that my generation had to experience. It was never our intention to criticize or put together a rebellious speech, that is perhaps more typical of the eighties generation. It was much more important for us to understand the complex reality that we lived in and expose it without artifice. It is through the use of research methodologies and a survey of reality, similar to those used in archaeology, that the themes by Ordo Amoris reveal the reality of the Cuban crisis of the mid-nineties. For Cuba’s cultural officialdom that became very uncomfortable. My decision to live in Europe has nothing to do with Ordo Amoris, our collaboration after ten intense years was exhausted, and in any case it had come to an end. The reason I decided to move to Europe was clearly based on my desire to know art in depth and to get in contact with new ways of thinking and creation. Fortunately, or not, it has never been my intention to change any political system, let alone anyone’s life.

BC: Do you think the art world should be more politicized considering the current economic and intellectual crisis?

DH: On the contrary, I believe that art should get away from all this mess and move upwards to elevate everyone.

BC: Is it possible to escape the political dimension once you are born in Cuba?

DH: As I said earlier, it is impossible to escape from what we are and it is even more difficult to change the way geopolitics influences the interpretation of contemporary art. Those who would like to escape from it would have to go far—to a place where being a Cuban artist does not have any political meaning. Where is that place? In a country called Oblivion.

Diango Hernández. The New Man and The New Woman