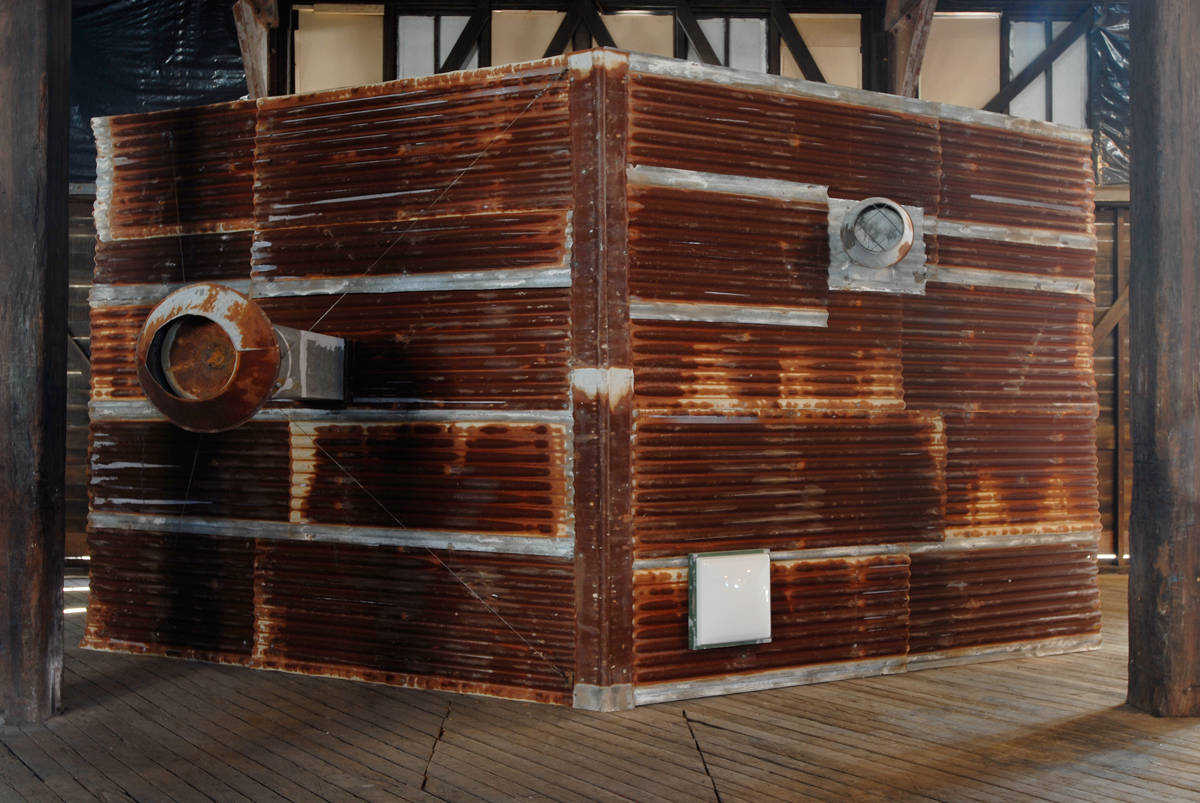 What it was ours It’s still ours, but now the ruined F is my home. Whether an improvised wall a corner of a house or the half of a box can be associated to the appearing of “Cris(is)Home” and it’s constructed out of an old and ruined fragment of industry’s roof. This “object” shows two faces, one it’s the outside of a roof, made out of corrugated metal, two chimneys and a light window and its second face it’s the inside of the roof that shows its inner structure and it has hanging on it an improvised screen on which will be projected a video called “Emilya and the pike”. “Emilya and the pike” is a Russian folktale and tells the story of how a lazy and foolish guy became king using the will of a charmed fish. The video is made by fifty images that were used in Cuban schools during the 60’S, 70’s and still in the 80’s to teach the history of communism and each one of these slides came originally with a text explaining the slide itself and talking about how good and glorious was the process of building the communism and how brave were its leaders. These texts are now in the video substituted by the folktale’s text where the main character of the tale (Emilya) it is now played by Vladimir I. Lenin. The sequence of images is accompanied with “Rapsodia Cubana” a music piece composed by Ernesto Lecuona in 1955 and performed by the Polish National Radio Symphony Orchestra conducted by Michael Bartos.

The sustained economical and political crisis that started in the early 90’s in Cuba has brought to the ordinary individual the urgency of surviving, the everyday life became a battle field where people struggled hard in every corner to get what they need for living, everybody was using what it was already a ruin or any forgotten fragment to build something useful out of it. All the promised economical development of the Revolution collapsed, the industrial aims achieved in the 80’s thanks to the contribution of the Socialist countries from the east were fading out fast and in the turn of two years the scenario was again without hope, like it use to be for us a century ago, without allies and with many enemies, the biggest: The Soviet phantom.

The official construction of a new style of life was already established in the 90’s, style of life that was baptized by the government as “Período Especial en Tiempo de Guerra” (Special period for war times) this was an extreme period where the government wouldn’t support anymore the basic needs of the population as they where doing it before, I am talking around mid 90’s, by that time there was a popular voice saying every day “hay que luchar” (we have to fight) what it means we have now to figure out our life by our owns and to wait for a new and official definition of future.

Cris(is)Home explore the surviving of the individual freedom in certain kinds of political crisis and present the education as a process of indoctrination where the only cure we can have against it are our personal fantasies and to use their power to transform (for instance) the history in a big toy.

Catalogue: A full colour catalogue of 304 pages provides a comprehensive overview of the exhibition, its artists, and the ideas that informed it. The publication features an extensive essay by Charles Merewether and eight specially commissioned texts by leading writers from around the world: Jack Persekian, Branislav Dimitrijevic, Viktor Misiano, Hou Hanru, Chaitanya Sambrani, Peter Osborne, Natasa Petresin, and Rasha Saiti. Also included are commissioned texts by 85 international writer on each of the participating artists.

Varcharz in collaboration with Mouse on Mars

Inside the mouth of the panther