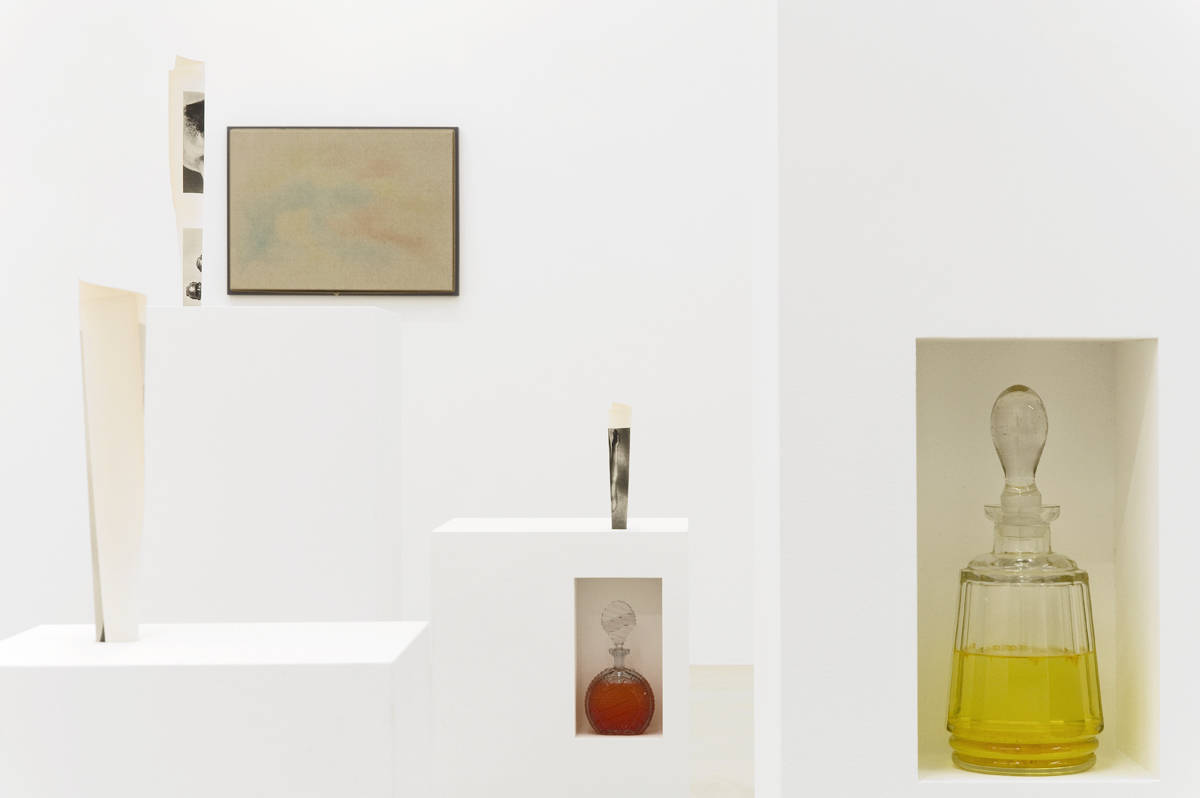 Diango Hernández has in the past noted, both slyly and acutely, his own ‘tropical sensitivities’. Certainly they could be discerned in the Düsseldorf-based Cuban artist’s quietly exhilarating exhibition in Basel, though not in the conventional or clichéd forms that evocations of the tropics so often take; there were no potted palms or brightly patterned tiled. Instead, the elegant if strangely alien modernism (Europe by way of the Caribbean and back again) emanating from the objects, paintings, and assemblages on view seemed keyed to a peculiar humidity. That is to say, if one were to gauge the atmosphere of these works, it would be both stifling and sexy, and definitely wet.

But water, in all its forms―liquid flood, steamlike evaporation, crystal-like ice―was the point of Hernández’s show. See the suit of nine framed works on paper, Crsitales, 1936 (all works 2011), which opened the exhibition in one long, even row. The elegantly modern black-and-white prints of heavy and decorous Villeroy & Boch crystals goblets and glasses―arranged on tabletops like classically commercial rejoinders to Giorgio Morandi’s more abstracted assemblages of vases―were taken from a 1936 German catalogue. Besides the framing, Hernández’s touch could be located in the delicate pools of translucent watercolor that filled many of the glasses with lemon, sky blue, and rusty orange. Farther down the wall hung a set of larger, watercolor-on-linen paintings, from a series titled ‘Humid Memories,’ 2011-, the same bright colors illuminating their brown-linen grounds. Here the color assumed the form of cloudlike stains, hovering and blossoming from the canvases’ centers. It was as if a painting by Paul Klee and Marc Chagal had been distilled of both figure and form until just color―ever so subtle, without gesture―remained, gorgeously spectral yet oddly specific.

This channeling of European modernism through a contemporary Cuban mentality continued with ‘Crystal Clear’ 2011, a series of white pedestals situated in the gallery’s center, whose classicism was complicated by the objects they supported. Each contained a niche that held a heavy crystal decanter filled with candy-colored water, suggesting green, orange, or yellow liquor. Emerging from a hole in the top of the pedestals were rolled-up book pages torn from a catalogue of bronze figures by early-twentieth-century German sculptor Georg Kolbe. This strange plumage and the pedestal themselves were lovely and autonomous, despite the assembly. Like Hernández’s watercolors come to life, they took their simulacral status seriously. Meanwhile, slightly shabbier, more provisional works filled the back room. In Studio Monument, an old brown couch turned vertically against a wall reveled a lightbulb inside it shining through the worn velveteen like a satin (an echo of the paintings on linen). My Bottle of Rum, an old-fashioned record player also turned sideways, was topped with a piece of illuminated crystal, perhaps a device for seeing the future (or the past).

The exhibition’s backstory is pertinent: It involves the flooding of Cuban artist Florencio Gelabert’s studio, and a water-damaged drawing that Hernández bought some years later. But this story―like the too-pointed titles of numerous works on view (After Raining, Muddy floor and the series ‘Humid memories’ ) and the show’s title itself, ‘Crystal Clear’―seemed reductive, given that a less literal kind of watery transformation and slipperiness of meaning, event, and material was perceptible throughout. Why wash the works of their mystery? Hernández say the ‘found object’ as an art-historical concept does not exist where he was raised. In Cuba, each object is by necessity ‘provisional,’ on its way to its second or third act. Water, steam, ice.