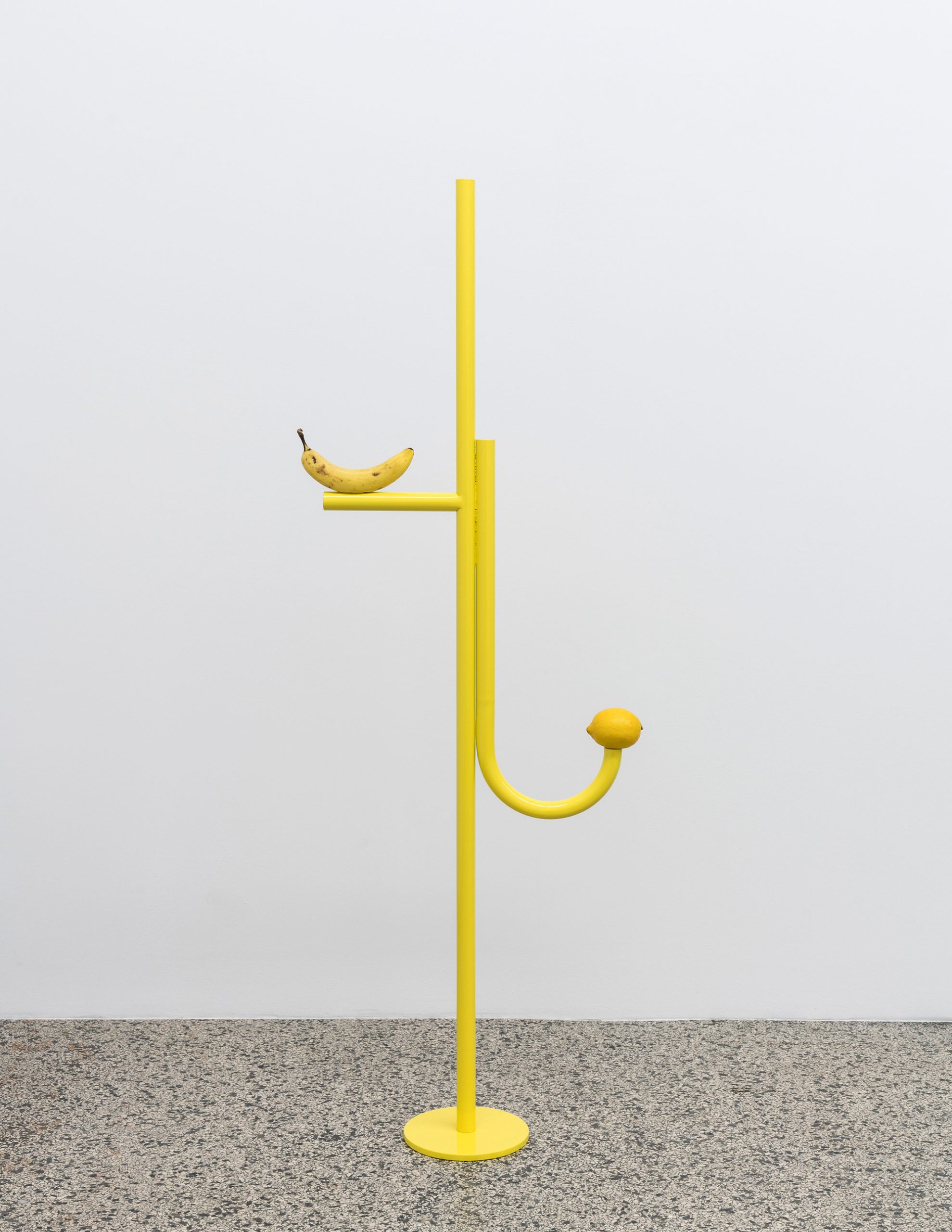 During these harsh winter days, nothing is more distant from Düsseldorf than sun, sand and sea. Visitors should consider this before entering Diango Hernández’s exhibition, ‘Amor Amor’, since, like the majority of the artist’s repertoire, it deals primarily with a longing for his Cuban homeland. Fittingly, the show’s inventory consists of tropical emblems: fruits, sunsets and, most prominently, waves. At Van Horn, these waves run back and forth in even, colourful lines, carrying more than Caribbean flair alone. Two large-scale acrylic works on canvas, La Habana, 21 de enero de 2004 (Havana, 21 January 2004) and La Habana, 5 de diciembre de 2010 (Havana, 5 December 2010, both 2017), see texts transformed into geometric ripples: colour gradients shifting from light red to yellow, green to ultramarine. Perhaps the acrylics mark an attempt to capture the colours, smells and sounds of the Havana that is evoked in a series of fragmented letters from the artist’s mother, which are quoted in the press release. In any case, they seem riddled with a genuine longing, one sentimental and exuberant in equal parts.

Waves are utilized differently in Esquejes de periódico (Newspaper Cuttings, 2016), another acrylic on canvas that comes with no textual framework. On a lush green background, the breakers run horizontally – blue in the lower third, milky yellow above – but the kitschy, minimal aesthetic of the seascape is intermittently destroyed by lines that are partially washed away, drifting off into blurred patches. Amongst the clarity, these blemishes trigger moments of intense irritation that can, in the best case, lead to the realization that Hernández is processing his own memories, which have perhaps grown hazy over time, or have become sugar-coated by the clichéd yet unsustainable image of Cuba as an idyllic, tropical paradise.

Moments like this are essential to ‘Amor Amor’, as Hernández is not looking to simply showcase Caribbean clichés, but rather to offer a glimpse behind them. Unfortunately, very few works in the exhibition manage this, and those that do, do so only with the help of a pre-existing knowledge of the artist’s biography and home country. Take Limón y platano (Lemon and Banana, 2017), for example, a modernist-style lampstand painted bright yellow, its bulbs replaced with the titular fruits. The work could be taken in a number of ways: at face value, it might represent a harmonizing of Western and Caribbean forms and cultures; in the context of Düsseldorf, it might draw upon Joseph Beuys’s Capri Battery (1985), which sees a lemon affixed to a yellow light bulb. For Hernández, however, Limón y platano connects experiences that were central to his youth. The lightbulb replacements refer to Cuba’s ‘Special Period’, an extended economic crisis that began in 1989 following the collapse of the Soviet Union and left the island with a malfunctioning power supply. It also loops back to the artist’s time at boarding school, where he was regularly forced to help with the physically exhausting fruit harvest.

Complementary knowledge such as this helps to break through the aesthetic simplicity of Hernández’s works, but in this exhibition, the minimalist exteriors seem to drown out the narrative strands that may run beneath. This is especially clear in a number of the bronze sculptures on display, including two cast bananas lying on top of one another. Even if ideas of aesthetic purism or the topoi of transience come into play here, what pervades is the very under-complexity that the title suggests: Dos platanos abrazados (Two Bananas Embrace, 2017). The same could be said about Los limones unidos vencerán (The United Lemons Will Expire, 2017), a ring of 14 cast lemons. Despite the sincerity of the work’s conception, here the danger of slipping into the very Caribbeanisms and clichés of longing that Hernández aims to circumvent remains latent.