Diango Hernández on Cuba and his London gallery show for BLOUINARTINFO by Nicholas Forrest | May 12, 2015 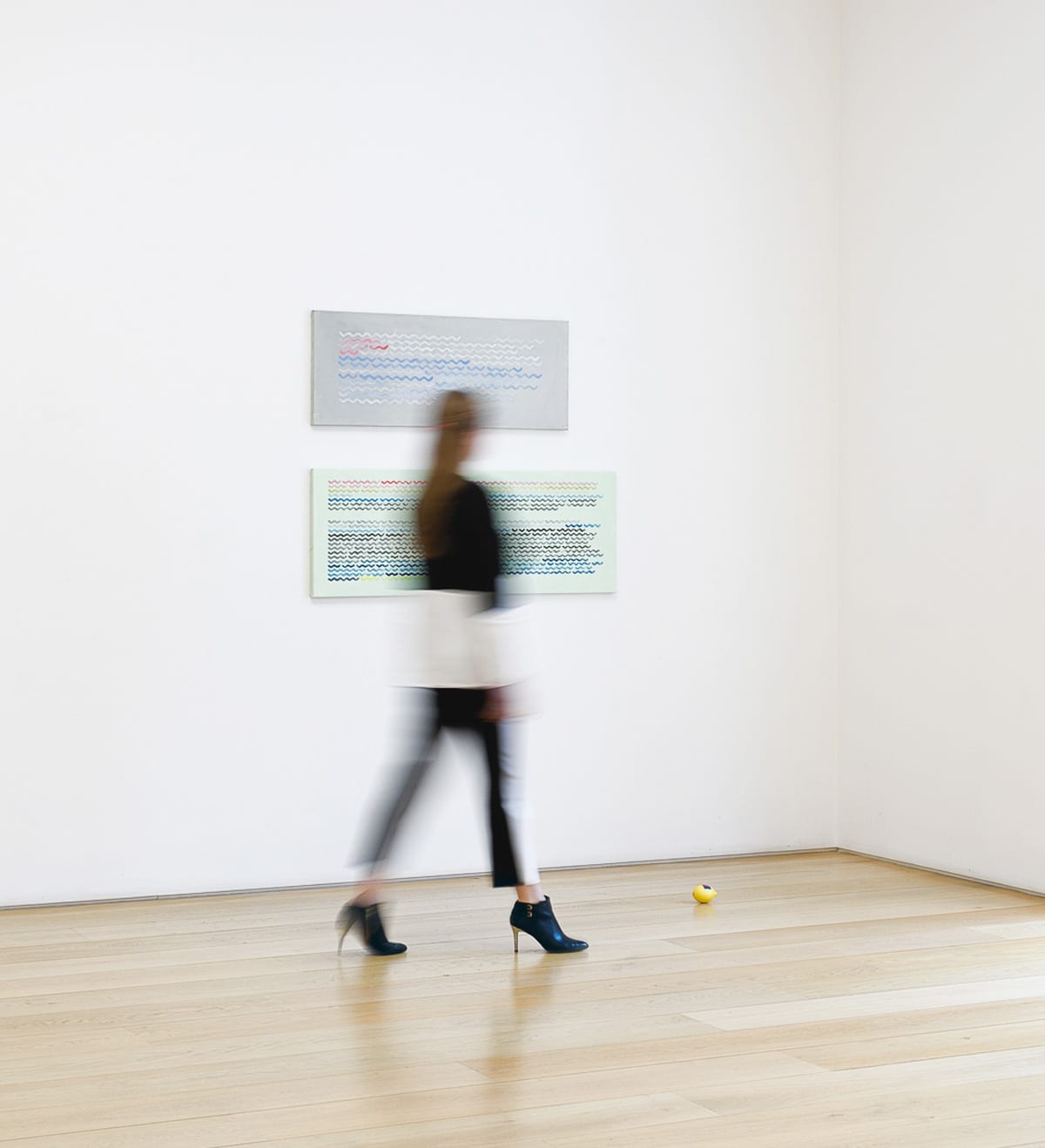 The Book of Waves” at Marlborough Contemporary in London is an exhibition of new works by Düsseldorf-based Cuban artist Diango Hernández. Comprising three new bodies of work that explore what Marlborough Contemporary describes as “problematic external perceptions of the country as well as its internal representations,” the exhibition continues the artist’s ongoing engagement with his country of birth which he left in 2003.

In the first body of work, Hernández has translated quotations from Castro’s landmark 1961 speech “Words to Intellectuals” into an unreadable wave-based font which he has then painted onto canvases. The second body of work is a series of lemons with international maritime signal flags painted on their skins. And the final body of work is a sequence of watercolours of sunsets painted onto the separated pages of a first edition of Ernesto ‘Che’ Guevara’s “Guerilla Warfare.”

To find out more about “The Book of Waves,” which is on show until June 5, and his ongoing engagement with his country of birth, BLOUIN ARTINFO got in touch with the artist and asked him a few questions.

The title of your exhibition of new works at Marlborough Contemporary is “The Book of Waves.” Could you explain the significance of the title and how it relates to the works in the exhibition?

For this exhibition the title has a particular relevance and function. On one hand it features two words that resonate in every work presented (book and waves), and on the other hand it tells you that what you will see is a book. In this sense the title works as a sort of opener, a device that takes you to another ‘place.’ But what would a book of waves look like or what is a book of waves anyway? I don’t mean a book with photographs of waves; I mean a book that makes you dizzy and eventually also wet. A book that with its endless rhythm can make you fall into a delirium. Continuity is maybe one important thing that I finally learned this time. When I finished the last work for this exhibition it was clear that it couldn’t be just the last one. Maybe the most powerful aspect of waves is that they seem to come and go forever.

Behind every single work presented in ‘The Book of Waves’ there are words; printed or spoken words. Castro’s long — very long — speeches are well known. I grew up surrounded by extraordinary texts and endless speeches; a form of political demagogy that transformed reality and my future into a piece of literature.

Since I’ve been living in Europe I’ve been reflecting on that distance that exists between the real island of Cuba and the fictional island of Cuba. By now my imagination of Cuba is certainly larger and richer that my actual memories of it. Cuba in my work is a fabrication, a ‘poetic truth.’ I wouldn’t say that any of this has anything to do with national identity in itself but rather with fictional realities. For this exhibition I put together into a single picture two images that belong to two different ‘Cubas.’ The first one a post-revolutionary Cuba (a Fidel Castro speech known as ‘Words to Intellectuals’) and the second image is a pre-revolutionary Cuba, a tropical island that is surrounded by magical blue waters. In The Book of Waves the pre-revolutionary Cuba emerges and is in fact the Cuba that you see in every single work. The other Cuba, the one dominated by the stubborn 20th century macho ideologies stays invisible in the back of each work. I often ask myself which of these two images is the strongest? The 60’s handsome bearded rebel or the coconut tree that in a calm morning moves gently its elegant leaves?

“The Book of Waves” features three new bodies of work. What does each body of work comprise and what are the threads and lines of enquiry that connect all three?

The waves paintings as well as the revolutionary sunsets and the tropical fruits are to me new strategies of ‘translation.’ Whatever we translate into a language that only few know and understand can be called encryption, but what do we call something that has been translated using multiple unknown ‘languages’? I would call it a painting.

After using multiple languages and working with several tools, the ‘original’ text or whatever you have used as the original reference vanishes, it disappears. It is in that precise moment when we look at this painting that the original text/reference becomes something else. These three new body of works deal differently with that complex transformative process: the ‘sun’ goes down into the Guerrilla Warfare book spreads, Castro’s words are converted into waves, and the harmless lemons lying on the gallery floor could tell us important messages only if we know how to read the international maritime flag code.

In this day and age there are many people who struggle with the cultural identity and national identity. What does your own unique experience contribute to the dialogue? How does your own experience inform and direct your practice?

Identity as a concept is totally overrated, plus it has been extensively manipulated and distorted. I prefer to understand identity as something very mouldable, somehow like liquid that moves inside a container that permanently changes its form. After living abroad for a while I think we shouldn’t take so seriously what we are but instead what we can be. Generally speaking people are very curious to know more of your story. I always think we shouldn’t push that too far, people also get tired of listening. We — the ones with ‘special’ stories — should listen more often to those with more ‘normal’ ones.

Generally speaking experience keeps playing a very important role in my work, though the areas in which my experiences happen changes quite often. I am closer now to what I call a point of arrival. I am enjoying more and more my studio practice and what I can do and reach mentally and physically from that space.

You also wrote a text about the “90 miles between Cuba and Florida.” What is the basis of the text and what does it explore?

That text is the starting point of an entire new body of works that I am developing for this year that includes also the works presented in The Book of Waves. Traditionally, water (rivers or the sea) has been used as natural borders for regions or countries. In the case of Cuba the Caribbean Sea has been always our ultimate border; for decades that extraordinarily beautiful sea has been also our China wall or our Iron Curtain. There is nothing ever built that can be more effective than an entire sea with plenty of tropical storms, powerful streams, and hungry sharks. The stories about these 90 miles are endless and these are all stories in which the main protagonist is a special kind of adventurer, a type of adventurer that is actually willing to die in the process of getting what he/she dreams of. These 90 miles are a strong reality but also an inspiring one. I am not the only one hoping that one day the world, especially the rich countries would take more seriously the future challenges of immigration.

The Cuban-American conflict has mostly affected Cuban people. I wish these 90 miles would have represented a dream for the Americans as well, but they weren’t. This is a one-way dream only, and it goes, as we know, from the south to the north.