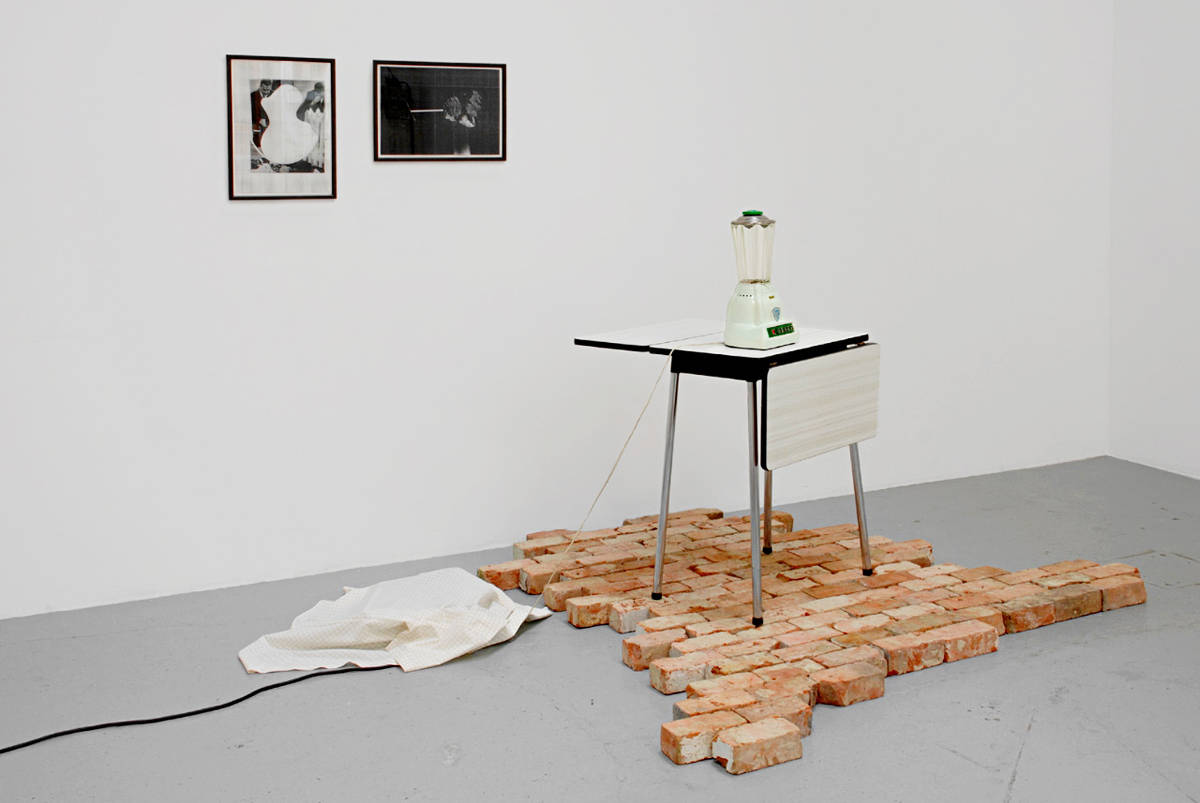 The artistic research carried out by Diango Hernández (born in Sancti Spiritus, Cuba in 1970, living and working in Düsseldorf, Germany since 2003) shows close ties with Havana, the city he grew up in. His paintings, drawings, collages and sculptures incorporate themes such as democracy (and its feasibility), communication and the idea of individual freedom.

Inspire me, again is about Hernández’s research into the nature of his home country, Cuba. The title is about change, but also about someone who was important and has turned into an icon. But it also means: what happens now? Hernández sees political ideas as an important inspiration for life, rather than as concrete systems needed to organise society. Logically, the revolution plays an important role in this. However, it also acquires universal significance in that it expresses the longing for a new beginning, a birth. The illustration on the invitation shows the image of a nursing mother, whose head has been replaced by that of Fidel Castro. The image is unambiguous: for the Cuban people Fidel is the ideological mother, the leader who feeds his children (and the future).

For his first exhibition in the Stella Lohaus Gallery Diango Hernández created five installations, in which the voice is transformed into energy. The sound recording media transmit the speech ‘The Second Declaration of Havana’, given by Fidel Castro in February 1962. In this speech Castro divulges to the people that Cuba is about to distance itself from the United States and that the country will pursue a communist course. Fidel’s voice and the words from his speech are translated into electric pulses, which then form the power that drives the objects. The rhythm of the machine is synchronised with the rhythm, the intensity and the silences of the speech.

The five objects were chosen very carefully. They are all normal household appliances, but for Hernández they have a strong symbolic meaning: the blender mixes, pulverizes and uniformizes. The vacuum cleaner tidies and cleans and ‘sucks up’, makes disappear. The radio connects us with the outside world, the fan puts the air in motion and refreshes. Lastly, the globe is isolated, but its power comes from within. The objects are being displayed on a naked brick ‘stage’. It reminds of a deconstructed wall, the unity is gone, the connection is unstable and vulnerable. They have become islands, loose relics from a past. The second-hand shirts suggest bodies, that could contain new or old leaders. The checked pattern is as a code to the Cubans: employees of the Department of the Interior or the secret police wore checked shirts. It was a kind of uniform. Now they just lie next to the objects, they are ‘off-duty’, the working day is over.

The painting Ultrasound to my mother history, We got twins conveys, in a very direct way, the paradoxical relationship between the US and Cuba that established itself when Kennedy came to power. The ultrasound shows twins in the mother’s belly. Again, this is about sound and vibrations, here transformed into a visual image.

In addition, Hernández dwells on the Kennedy murder in the collages alongside the objects. Puzzle-like pieces resembling the murder itself. The stone ‘socles’ resemble puzzle-like items, strange shapes of countries, or different provinces, states, maybe torn-apart continents. Traces of a cohesion that no longer exists.