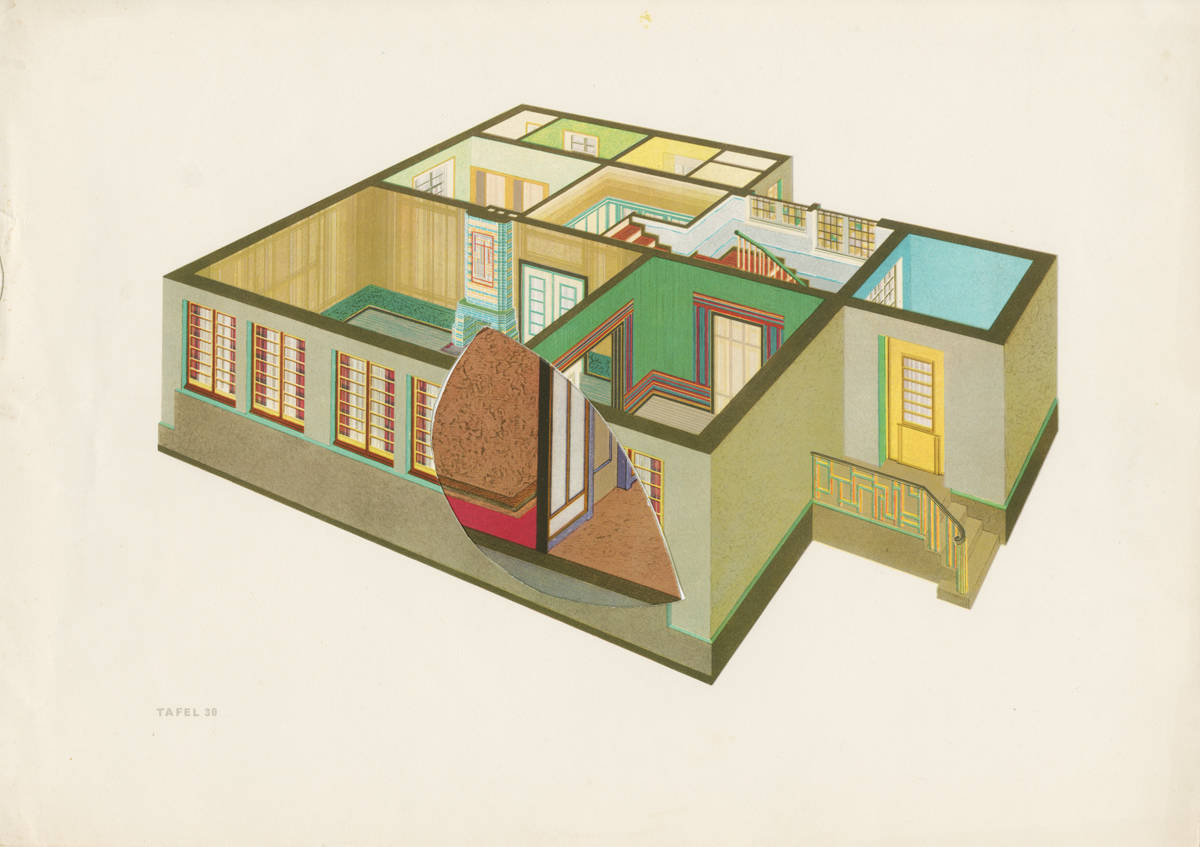 Jonas Schenk: Diango, at first I would like to hear about your thoughts concerning a problem that is written into the – one might say – DNA of every museum and its vast collection, just like the German Federal collection. An object that gets embraced by the walls of the museum has its entity as being an actual artwork finally acknowledged, thus once entering the museum an artwork reaches it peak. But what happens to the artworks getting dismissed into the depot sometimes never to be seen again? What were your feelings when the German Federal art commission acquired your work, not knowing what will happen to your installation?

Diango Hernández: The Storage room of a museum is indeed a very interesting place. Often seen either as a cemetery or as a greenhouse. I prefer to see it as a greenhouse. In most cases artworks travel a long road before getting into a museum collection, most artworks are acquired after they have been exhibited in several venues and in many cases the acquisition happens after the artworks has been already in another collection. My point is that an artwork has scientifically speaking a past, a present and a future but these three stages are not precisely clear under my point of view. I see contexts as a very important quality specially when it comes to understand how current an artwork is. Creating a rich context for an artwork is not a simple task to perform because it demands a continuous curatorial trajectory and at the same time requires a multi-layering surface from where people can read not only what is visible but also what has been done and what is hidden under the appearances of an exhibition. Museum walls are not magic neither their nails. It is not by a magic wall that an art piece gets acknowledged, more than often it takes years to validate an artwork, certainly museum walls can help but can’t make miracles. We must remember that what hangs in a museum is not only an artwork but the life of an artist together with the lives of many other that have given their very important contribution to the artist path.

Who is behind an acquisition could change many things for both the artist and the artwork. I was very positive when I got to know that the commission was interested in acquiring ´Mother the future was a political lie…´ at the time I knew some of the members of the commission and I knew how serious they were while making such decisions. After this installation was acquired it has been permanently traveling and exhibited in many different important venues e.g. Museum Abteiberg, MART Rovereto, Helena Rubenstein Pavilion, Museum of Tel Aviv. Now that the Bundeskunsthalle decided to include ´Mother the future was a political lie…´ I can’t be happier. Nevertheless is all right when an artwork ´rests´ and is ´resting´ in a good and thoughtful storage room…

JS: Is the being of an artwork bound to its context of presentation?

DH: Yes they are bounded, especially if we talk about curatorial contexts. Nevertheless consistent artworks could have certain autonomy and can survive rough or improvised contexts. When artworks are well presented and properly introduced they can develop into a source of research for the artist itself, it is when a curatorial process can become a stimulating and a rich process not only for the artwork but also for the artist that created it.

Speaking about social-political-economical contexts I have always thought that even artworks created and presented under specific situations can have a second life. There are many factors that can manipulate the reading of an artwork but when they are properly inserted into an understandable tradition the artwork can develop into something new, something totally different than what it formally was.

JS: As we can see in the exhibition, many of the artworks are dealing with a historical context, so as I might suggest does yours. Some artists are referring to concrete events whilst other stays rather vague. Ones like to call this kind of art being politically engaged. Can we thus speak of political art? Do you even use this word?

DH: I avoid the use of such definitions because politics in art are often seen as an extension of political issues. This narrow room often pushes the artist into a field that is already deformed by all sorts of manipulations. Instead I see politics as an individual matter; politic is certainly relevant but just in order to find a different individual language. Addressing a political issue doesn’t make you a political artist but instead makes you an individual that is aware of the implication and impact of politics.

I was educated in a heavily politicized context, as we all know by now in countries like Cuba political awareness is a form of currency and you always carry it in your pockets. When I moved to Europe I realized that here artists are rather more interested in politics than in socio-political issues, that explained many things to me, suddenly many artworks that I only knew from books started making sense. This understanding produced an important shift in my work; suddenly after a couple of years traveling through Europe I started seeing art content as a form of socio-political content. Any form of critical discourse should happen from the arts and must shake the fundaments of its history but if what we are looking for is a real political engagement, we must change the field of operations.

The translation of a socio-political event into an artwork is like pouring an extreme volatile substance into an open container, the particles go into the air, you can smell them but can’t see them. Basically any artwork can be that container for any kind of ´substance´, sometimes the substances are toxic and sometimes they are just nice fragrances.

JS: You were born in Cuba, being raised in a Socialist system, most likely facing political harsh circumstanced like absence of freedom of speech. Your work ´Mother the future was a political lie…´ seems to resort to your personal experiences of the past. But still, given that the viewer is unaware of your origin, the work gains a ubiquitous meaning, being substitutional for a single viewer. Does your past still affect your works or do you avoid connections to your biography.

DH: Biographical aspects are still relevant in my actual practice; I see them as an important source especially when I develop solo presentations. Certain events in my life continuously give me ideas and help me with the articulation of stories that are the base for complex presentations. My actual condition, that one of being away from the place I was born, is not alien to many people with different political and social backgrounds. Sometimes memory is the only tool we have if we want to keep connection with the place we were born. I am aware that memory can also anchor you in the middle of a distorted sea where truth and fiction behave like two good friends. In my case distance gives me the space I need in order to reflect about my position as an individual. When I was still living in Cuba I thought I was isolated from the rest of the world but the truth is that you are never isolated if you are close by the place you were born. After living for ten years abroad I realized that I am now truly isolated, I live only from an for my art and it is because this condition that I have found a different country, a country without president and also without land.

JS: Do you think that many contemporary artists have adopted a teleological way of self-affirmation, saying ´this is art because it is art! A renaissance of L´art pour L´art?

DH: It is hard to put contemporary artists in such general affirmation, but it is indeed a very interesting question at least for the times we are living today. I remember having a conversation with Pepe Cobo (Spanish art dealer, for more than 25 years gallery owner in Madrid). In this conversation he remarked how bored he was of answering the same question for 25 years of fairs and gallery public activities. The question was a very simple formulation: Why do you think this is art? In general, people confront contemporary art with certain scepticism, they are suspicious and they believe artists wants to fool around with them. They either ask the dealer or themselves: Why should I take this seriously? Why should I even think of contributing with such joke?

I have lived until now in different countries with totally different understandings of what art could be. This topic is extremely subjective; it varies even inside the same country. If you daily dedicate yourself to one thing and if you live from it, that’s what you do and what you are as a professional, all the rest is pure speculation. There are different models and certainly very complex practices and most important many strategies of survival. A contemporary artist is in general a very busy individual doing many different things in order to do and support the thing that matters, his or her art.

I guess artists as any other person can get tired of being asked the same question and most important we can get very impatient when people push us every time to the same corner. Just imagine people asking the baker every morning: Hello Mr. X, could you explain me why this is a bread? I am sure the answer will be very obvious:

-You are in a bakery; I am a baker and that, yes, what you have in your hands is called bread. We can seat over breakfast, eat couple of those together with some butter and jam on top and you’ll see how magically you’ll realize: Oh my god you are right, this is bread!

A work of art is a trajectory and in its inner core contains lots of different experiences that sometimes are evident and visible and in some other cases are hidden and demands from us understanding and also certain knowledge. There are many things that can be questioned when it comes to the reading of an artwork but once you start questioning the identity itself of an artwork you can be sure that no one else has already censored any further understanding of it but yourself. I would accompany the affirmation you have formulated in your question with couple of other things: This is art and not just because is art but because I am an artist and my work as a contemporary artist is precisely to shake your understanding of things and to move you from where you stand now to an another area, to that place where nothing is certain and only few things must be taken for granted.