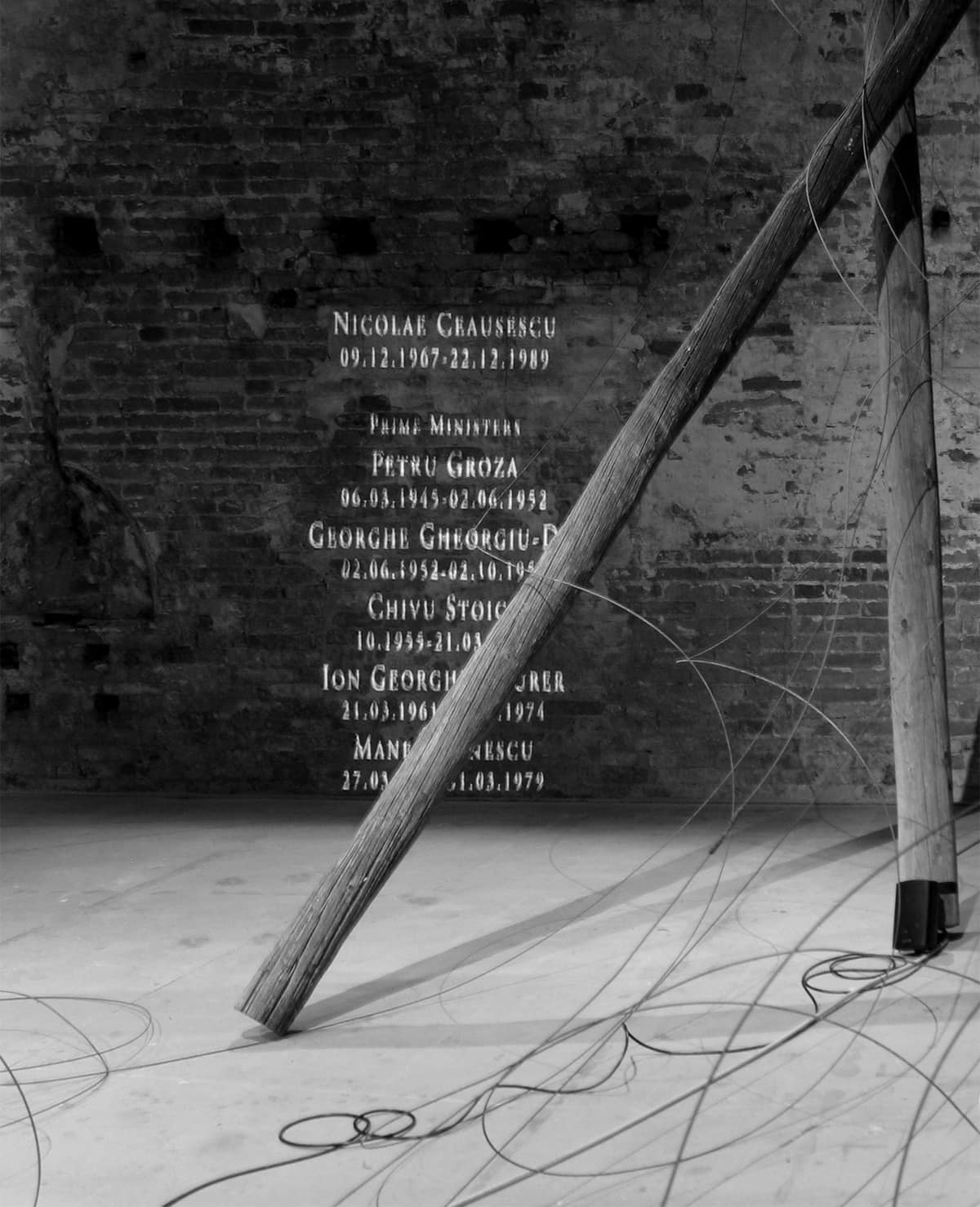 In the 1990s Diango Hernández was prodrucing an extended series of drawings which processed the political and economical crisis of Cuba after the colapse of the socialist systems in East-Europe. ‘I was acting artistically out of a collective consciousness. Havana was a backdrop, a big landscape of mistakes.’ The installation Palabras is a three-dimensional materialisation of this special drawing activity reflecting on a political constellation – the dramatic, everlasting conflict between Cuba and the United States – in the construction of a ruin, an allegorical site, shifting between a range of factual experience and images of desire and mutual projections. The almost mythical dimension of the conflict of opposite systems, – both deeply conservative in the very sense of the notion – , is inflected with a sense of melancholy and nostalgia, while it was and is still producing highly destructive and brutal effects on humans beings.

Palabras materializes this state of destruction of past and present, belonging to the collective perception of the every-day in Cuba, a sedimentation of to political into the minds of people: ‘Palabras is a scenario, an abandoned construction site, ruins of a long process of longing and of tropical trance, but also Palabras is a fact proving another way of construction. The political demagogy has destroyed a city, but it as well has constructed a country, it formed.’

In the foreground of the installation some primitive electricity poles are arranged in way which transports a sense of out-datedness. Due to neglect or destruction they became dysfunctional. The poles are reminiscent of the praise of communication technology in communist propaganda and at the same time contrasting the standards of technology in the US today, the big machinery of high-end communication and entertainment industry, forming the modern form of mass propaganda. ‘Electrification was the most important strategic-economical plan in Lenin’s agenda for all socialist countries, especially the ones called underdeveloped…, electricity had an important function: to bring technology and also the industry of propaganda and indoctrination to the most distant places… .’

A video-projection and a recorded sound-choreography are collaged into the reality effect of the staged objects, the abandoned site of the poles. The three levels of sound, objects scattered on the floor and the slowly fading images on the wall, turn the whole scenery into a moment of political trance: There is a sound track mixing the anthems of Cuba and US-America, a track called ‘Pentagon’ performed by Gonzalo Rubalcaba, as well as telephone conversation between President Nixon and Henry Kissinger on the Watergate affaire.

The projection is a subtle montage of politically highly charged images, calling to mind the complex relationship between Cuba and the States in the course of the 20th century: there are two images of the monument to the Maine victims (‘A Las Victimas del MAINE’) which was inaugurated in 1925 and dedicated to the victims of the American naval vessel in the time of the Spanish-American conflict over Cuba’s fight for independence at the end of the 19th century. The first image shows the monument in the time when it was still considered as a symbol for the American presence in Cuba. The second photo shows the monument in its today shape with the Eagle demounted from it as a symbol of Cuba’s independence. Another image shows the massive Jose Marti-monument on Revolution Square in Havana from 1959.

It is a highest point in the capital and the strongest icon of Cuban revolution. Next to the Cuban imagery we are suddenly confronted with a satellite photo from 1962, which was used as a proof of the presence of Soviet nuclear missiles on Cuba. Again an image of the same year, – but from a seemingly very different sphere -, appears, showing Rudolf Nureyev in an stunning ballet performance of ‘Le Corsaire’. The course of the intense documentary is interrupted by an image of red roses. Their beauty has an acidly romantic presence and can not be related to the rest of the concept right away although there is something very disturbing to them. And indeed the roses become here a sinister symbol of American political trauma: After her husbands murder Jacqueline Kennedy stated: ‘Three times a day in Texas we were greeted with bouquets of the yellow roses of Texas. Only in Dallas they gave me red roses. I remember thinking: How funny … red roses for me.’ The video ends with a ‘trailer’ in which a list of the socialist countries presidents and prime ministers scrolls down to the song ‘E penso a te’ performed by Mina.

Live 04 in collaboration with Mouse on Mars