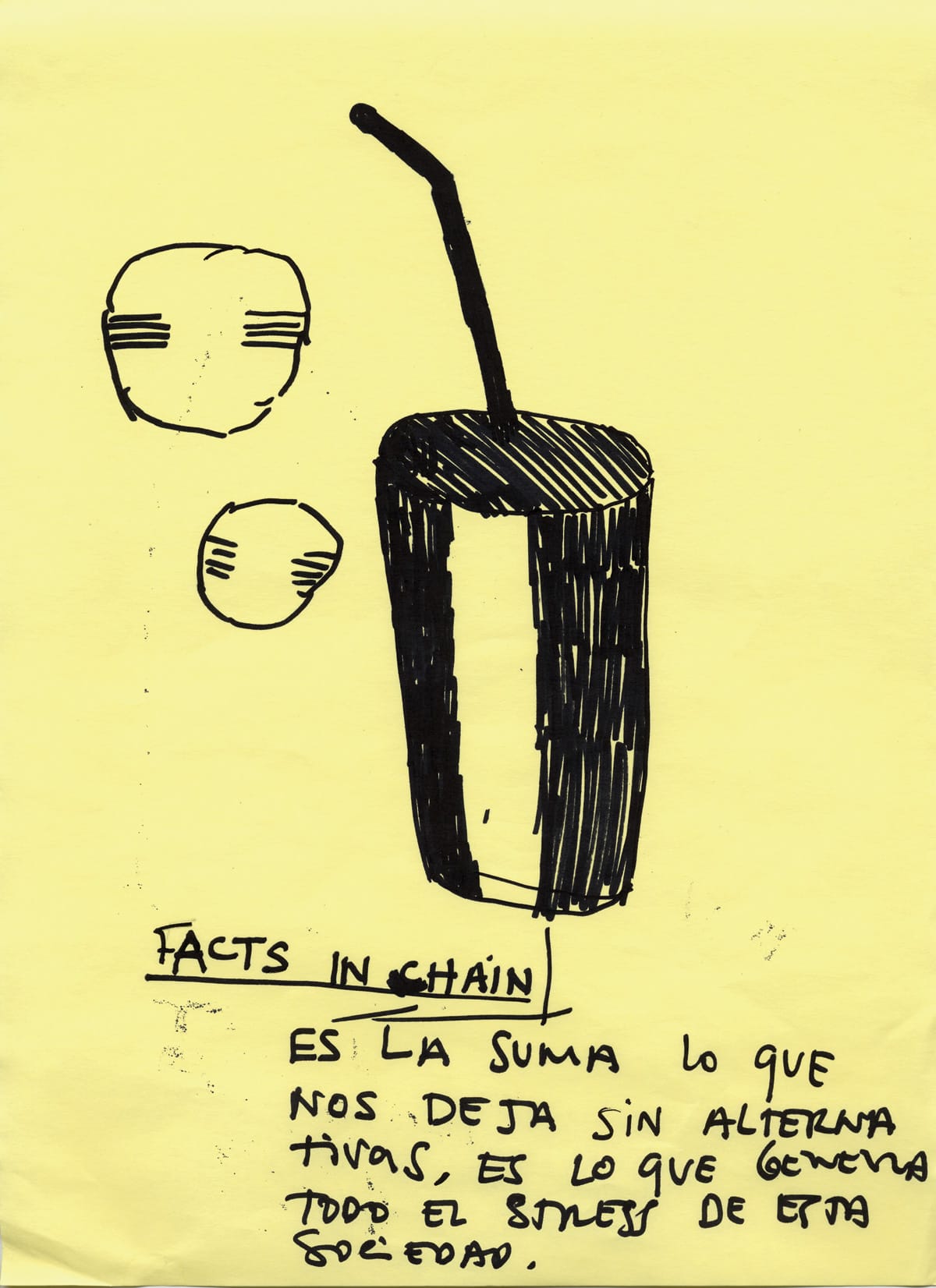 In the 1990s Diango Hernández started an extended series of drawings which processed the political and economical crisis of Cuba after the collapse of the socialist systems in Eastern Europe. ’We lost the last support of the Soviet Union, which meant confronting a big crisis. We knew about Perestroika and everyone was concerned: What was the political mistake? But the big confusion over the rising ecomomical crisis was soon predominating. And then, inevitably, the daily life was taken over by the struggle for survival. (…) At the same time I began to make this big mass of drawings out of what was my personal point of view of the crisis. I did self-portraits, illusionary architectures and cities, projects which are never going to be realized.’ Coming from a background of industrial design Diango Hernández formed the collaboration Gabinete Ordo Amoris with his friend Francis Acea. The artists collected everyday objects which were provisionally produced out the last resources people could get hold of. These objects were astonishing creations and they were the manifestation of a highly independent and individual reaction towards the broad circumstances of devastating poverty.

“These objects, pragmatic and strangely sculptural, had a special melancholic beauty, – they were products of a moment of dramatic transition’. Diango Hernández recognized their importance documenting a very particular chapter in Cuban social history. But the cheer anthropological activity of collecting seemed not to be satisfactory for his artistic sensibility and his understanding of the role an artists could take in this process.

In his eyes a far more adequate tool, the activity of drawing functioned for Hernández as a political diary and positioned the artist in accordance with the new urban productivity which grew out of the daily needs. His artistic practice resonated the perception of the crisis.

‘I was acting artistically out of a collective consciousness. Havana was a backdrop, a big landscape of mistakes. (…) I did it at home late at night and of course I could not tell this to anybody. In a modest and quiet way I began to comment on circumstances, places, opinions that poeple have. (…) They were hidden in my place without exposure which was actually in a way also a living condition of each of us. You can see some flashes from outside but what is really counting is what is happening inside. And it was happening in every family in every place. My practice was a document – writing, commenting, drawing -, the most sophisticated strategy for me.’

In his drawings Hernández transformed the objects from the street into utopian configurations. They gain a new life of their own, morphing into numerous possibilities of self-structuring. Often these biting scenarios imply a self-portrait. Depicted in deliberately naive ways which remind of Chagall or Picasso, the face of the artist is suddenly attached to the body of a horse or another creature of a kind, chimeras carrying a mission, using the disguise of the animal as a subversive strategy. Hernández regarded himself at this point as a medium of the political constellation surrounding him, while it became equally important to him to stage his individual position and emotionality right in the center of the little universe he created in his obsessive‚ automatism’ produced body of drawings. In actual fact he started to call his entire practice „drawing“, be it a complex installation, a sculpture or an accidental trace on a piece of paper.

‘After a while I had thousands of drawings in my house and I decided to come to Europe. Now I had something to say about what is a circumstance. It was a big testing to present them in the European context. They were not exotic items, no phantasy, rather they belong to a specific social history.’

However politically invested these drawings are, there is always this other fantastic side to them. Hernández’ iconography subtly relates here back to the narrative inventions of Cuban writer Alejo Carpentier. In his manifesto on The Marvelous Real (Lo real maravilloso) from 1949 Carpentier rejected the ‚pointless’ imagination of the Surrealists for not being rooted enough in reality. For him the tropics with all there exoticism, eroticism and anti-colonial struggles constitute the ideal surreal imagination.

In his novel The Kingdom of This World Carpentier re-enacts the time of Haiti’s liberation from French colonialist rule, a period of unsurpassed brutality, horror, and superstition. The ancient slave Ti-Noel becomes the key-figure, the leader of an a new type of guerrilla, escaping his prosecution by transforming with the help of voodoo into the bodies of different animals.

HOW COULD EXIST DEMOCRACY
IF WE ARE SLAVES

Diango Hernández’ use of romantic and fantastic motifs in his drawings is an attempt to formulate and enable a new position in contemporary art which owes a lot to the specific political and historical background he comes from. The disturbing presence of the conventional, icons of beauty and desire in his works are propositions for a future which is open to a strong imagination also in the realm of the political.

‘These works are subversive in a subtle way, because there is beauty implied in each of them. And I really like to keep it as a key for making communication possible through them. I am not interested in inventing something new, in pursuing a style or trend. I use the existing languages of art, through which something can then be read. In my opinion it does not make sense anymore to work in avantgardist categories. Particularly when it comes to architecture and urban structures artists tend to take it on as a language of the contemporary. I once choose the term ‚revantgarde’ to define my practice. Of course, it’s a risk for me to exhibit these works in the West. There is a constant misunderstanding and incomplete reading built into their reception.’

Catalogue: Revantgarde, Published by SternbergPress, Edited by Anke Kempkes, Texts by Diango Hernández and Anke Kempkes, 2005, English/German/Italian, 17 x 22 cm, 170 pages, 130 color ill., softcover, ISBN 978-1-933128-07-8. In the 1990s, Cuban-born artist Diango Hernández started an extended series of drawings which processed the political and economical crisis of Cuba after the collapse of the socialist systems in Eastern Europe. These drawings functioned as a kind of political diary where the artist could transform everyday objects from the street into utopian configurations. Hernández came to call his entire practise “drawing,” be it a complex installation, a sculpture or an accidental trace on a piece of paper. Revantgarde documents for the first time the artist’s most recent body of work. While the drawings are still deeply rooted in recent Cuban history, they feature romantic and fantastic motifs which constitute an attempt to conceive of a highly imaginative future. The essay by German art historian Anke Kempkes traces the artist’s biography and discusses how his iconography relates to the narrative inventions of Cuban writer Alejo Carpentier, who rejected the “pointless” imagination of the Surrealists for not being rooted enough in reality. According to Carpentier, the tropics with all their exoticism, eroticism and anticolonial struggles constituted the ideal surreal imagination.