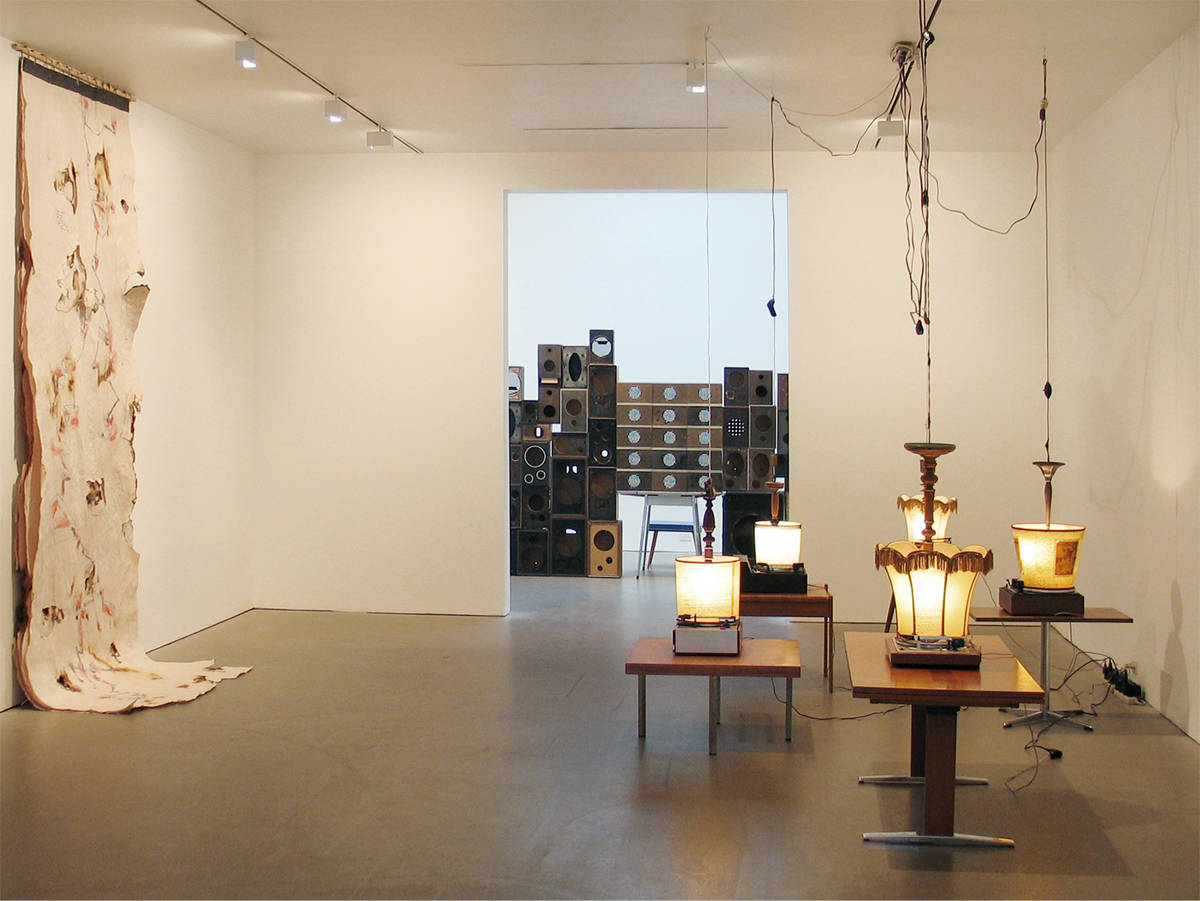 Diango Hernández’ first exhibition in North America will open at Alexander and Bonin on April 15, 2006. Spies will be shown concurrently with Traitors at Galería Pepe Cobo in Madrid. Born in 1970 in Sancti Spiritus, Cuba, the artist has lived in Europe since 2003. The work in both exhibitions reflect his analysis of the iconography and rhetoric of the Cuban revolution and the tensions and absurdities of the North American-Cuban relationship since the 1960`s. The exhibition is a group of “reports to the enemy” that reflects the relationship between an artist and a spy.

For his exhibition at Alexander and Bonin, the artist has created works incorporating found objects such as record players, speakers and domestic furniture as well as language and sound. Drawing (Presidents’ secrets), upside down lamps project transcriptions of secret phone conversations between Kennedy, Rusk, McNamara, Johnson and others onto an installation of record players set on coffee tables. Drawing (living inside my drawers) is a small cabinet on whose open drawers two texts are projected: speeches given by John Kennedy at the time of the missile crisis in 1962 and by Fidel Castro concerning the US spy flights over Cuba. This work also includes a piano composition by the Cuban composer, Ernesto Lecuona. Wake me up is a series of ten drawings in which inkjet images of the ten American presidents from Dwight Eisenhower to George Bush are combined with an ink self-portrait of the artist asleep on their shoulders. Rather than an ‘iron’ or a ‘bamboo’ curtain, Hernández will exhibit Paper Curtain in which partially burned holes reveal small drawings and the text, “After some time, democracy is just another utopia, but I have already a better utopia to dream with”.

In 1994, Diango Hernández began his artistic practice in Cuba as a co-founder of Ordo Amoris Cabinet, a group of artists and designers who focused on invented solutions for home design objects by Cuban citizens compensating for a permanent shortage of materials and goods. Diango Hernández lives and works in Düsseldorf. His work has been the subject of recent solo exhibitions at the Städtischen Museum Abteiberg, Mönchengladbach and Kunsthalle, Basel. A video and sound installation was included in Always a little Further at the 2005 Venice Biennale and he will exhibit in the forthcoming Biennale of Sydney (June) and São Paulo Biennial (October).

Varcharz in collaboration with Mouse on Mars
Manage Cookie Consent
We use cookies to optimize our website and our service.
Manage options Manage services Manage vendors Read more about these purposes
View preferences
{title} {title} {title}