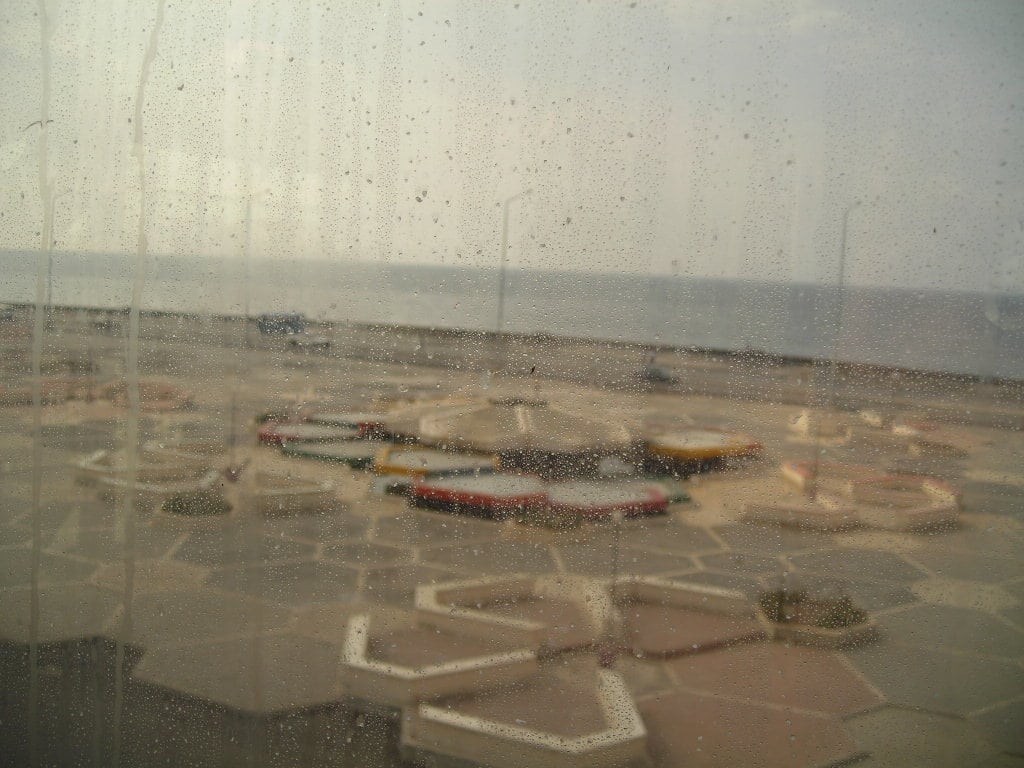 The starting-point for the exhibition Swans without a lake is a story by Diango Hernández, which tells of a subversive action in which Hernández took part in 1991 at the Cine Yara, a cinema in Havana. The experience in the cinema becomes the seed from which all those aspects and themes develop which Hernández artistically confronts in his works for the NAK. The focus of events is formed by the scenery of the dark cinema auditorium, in which a note-book is passed around in order to gather the 15,000 signatures required by the constitution if new elections are to be held. The actual theme of the story, though, is personal experience, inner conflict: personal fear, and the inability to publicly acknowledge with logical consistency that the revolution has failed, become descriptive of the state of the collective, a pointer to an inability on the part of the whole of society to overcome its own stasis, the weight of history. The notion of a successful revolution, cherished over many years, had largely blurred the recognition of a creeping transformation towards a totalitarian system.

The realization of one’s own paralysis opens up further questions: to what extent is one rooted in one’s background, can one change without risking one’s identity, without detaching oneself from one’s own certainties? This ambivalence also marks specific aspects of the biography of Diango Hernández, who has always understood his voluntary exile as the opportunity to use communication to overcome his own country’s isolation. Metaphorically therefore the title of the exhibition should be understood thus: the swans without a lake are separated from something to which they actually belong.

In the lower exhibition room of the NAK Diango Hernández presents such a lake in the installation Word dissolved into water. It consists of four irregularly shaped rusty steel basins filled with turbid water. Individual typewriter-keyboard letters float on the surface. The shape of these basins recalls the Fuente de la Juventud, a public fountain which was built on Havana’s prestige boulevard Malecón in the immediate vicinity of the open sea. At the NAK this revolutionary symbol of the young socialists has now become a swanless lake, a dilapidated and worn-out wishing-well, a receptacle for forgotten utopias, dreams and yearnings, in whose fulfilment no one any longer believes. Like the coins in the fountain, each representing a wish, the letters of the oft-written What if? are slowly dissolving in the water.

The second work in the lower exhibition room, entitled Wet Wall, fits seamlessly into the picture. The rows of empty paper pages have warped unevenly under the influence of the water, they are curling and opening at the edges and corners. Associations are awakened with the peeling façades of Cuban buildings, and we are reminded of the high waves of the sea that frequently flood the roads near the coast. Where the land meets the sea, Cuba’s extreme isolation takes on concrete form, it becomes inescapable and palpable. The isolation of a Cuba marked by the political and economic collapse of the Soviet Union, a Cuba forced into worldwide isolation in the early 1990s by the disappearance of her most important trading partner and financier, and by the ongoing United States embargo, is not just economic. The sea also stands for isolation from independent information, from worldwide communication and from a free exchange of ideas unimpeded by censorship. It is this communication isolation in particular that is often focused upon in the works of Diango Hernández as a painfully felt deficit, and can be seen in his works also in the form of a socialist product-aesthetic that clearly marks the post-revolutionary stasis.

The helplessness generated when communication is thus interrupted is physically palpable in the upper exhibition room of the NAK. The room-filling installation The broken cinema relates immediately to the events of the story. In the twilight is the eponymous broken cinema whose seats of bent reinforcing-steel stand as fragile drawings in the room, albeit now useless for sitting on. The tightrope walk between revelation and anonymity created by one’s own presence in the murky atmosphere of conspiracy becomes manifest in the three seats clearly exposed by a round arch. The curious isolation from mutual exchange, thematized in the story as the fear of recognizing the face of the person sitting next to you, is reflected in the loudspeakers attached to the undersides of the seats. The cables, cut and waving free, quickly make it clear that they no longer have any function whatever. Although the auditorium would like to articulate a common concern, direct transmission is prevented and everyone is thrown back on his or her own painful silence.

The room is illuminated by a flickering abstract black-and-white projection and accompanied by atmospheric piano music. The picture material used for the projection derives from a set of slides designed to provide a lively illustration of the history of the Soviet Union for Cuban schoolchildren. From this set, Diango Hernández has selected pictures that depict the first living being to be sent into space, the dog Laika. If Laika had not died relatively quickly, she would have circled the earth alone for a long time, as there had never been any plan to bring her back.

Diango Hernández’ exhibition at the NAK represents a new departure in his artistic œuvre. For the first time, he is staging an exhibition whose main installations have been specially created as new productions. Starting from the original and artistic recycling and improvisation measures employed by Cubans in an attempt to compensate for the shortage of new everyday goods, Diango Hernández has hitherto used mainly objets trouvés for his works, which he then arranges as installations accompanied by videos and drawings. In spite of this, they retain characteristic aspects of his working method, to which his drawings make a particular contribution. The block of 28 drawings, which Hernández is also displaying here, use different associations to act out, so to speak, the themes of the exhibition in a whole variety of ways, and can be understood as a visual “stream of consciousness”, which, like the well-known literary technique, communicates subjective perceptions, thoughts, feelings and reflections to the outside, directly from the inner consciousness and without further comment. This characteristic entanglement in Diango Hernández’ work of associative individual experience and the objective state of society as a whole comes across as the logical reworking of the foundations of historical materialism: being determines consciousness and social relationships also determine individual experience and perception.

Swans without a lake